Italian Grand Prix: F1 released a 360° video of the Hamilton-Verstappen crash to show how the Red Bull Racing car rose on the top of the Mercedes F1 car. 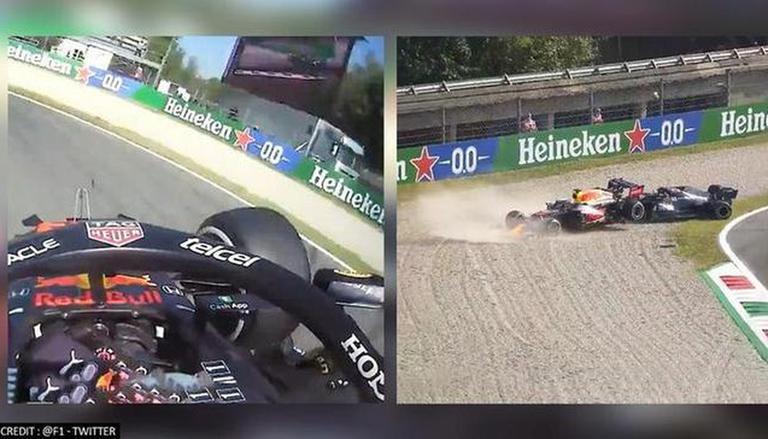 
The Italian Grand Prix 2021 witnessed a horrific accident between title rivals Lewis Hamilton and Max Verstappen, a crash that took both drivers out of the race. Fortunately, both drivers escaped unscathed. As a result of both drivers crashing out, McLaren F1 took their first win in almost a decade with Daniel Ricciardo. This was McLaren's first win since the 2012 Brazilian Grand Prix when Jenson Button stood on the podium's top step.

While it was all celebrations for McLaren F1, Hamilton was just relieved that he escaped the incident relatively unhurt. All that the British driver suffered was a sore neck. The latest 360° video released by F1 highlights the impact of the crash.

F1 released a 360° video of the Hamilton-Verstappen crash using a camera that all cars carry on their nose. As per the footage, one can see Max Verstappen's car rising above Lewis Hamilton. At first, the Red Bull Racing car made contact with Hamilton's halo before the RB16B launched off the kerbs and onto the top of the Mercedes F1 car. If it was not for the halo, the seven-time Drivers' Champion could have suffered serious injuries.

READ | What is 'Halo' in F1 that saved Lewis Hamilton at Italian GP crash?

While speaking after the race on Sunday, Lewis Hamilton told the media his point of view of the crash with Max Verstappen. The British racer said, "We were obviously just ahead, we had a bit of a slow stop, came out, braking into Turn 1. I made sure I left a car's width on the outside and I was ahead going into the corner, and next thing I know, I guess Max went over the second kerb or something like that – he obviously knew he wasn't going to make the corner – and he drove into me. So, next thing you know, he's just on top of me. So, definitely unfortunate and we'll speak to the stewards after this I’m sure."

After the incident was discussed with the stewards, Verstappen was given a three-place grid penalty for the next race in Sochi. The Russian Grand Prix will take place from September 24 to 26. As things stand in the F1 Drivers' Championship standings, Verstappen (226.5) leads Hamilton (221.5) by five points.