Hamilton Vs Verstappen: What Happened At Azerbaijan Grand Prix 2021?

Hamilton vs Verstappen: Here is what happened to Max Verstappen and Lewis Hamilton as both title rivals failed to finish the Azerbaijan Grand Prix. 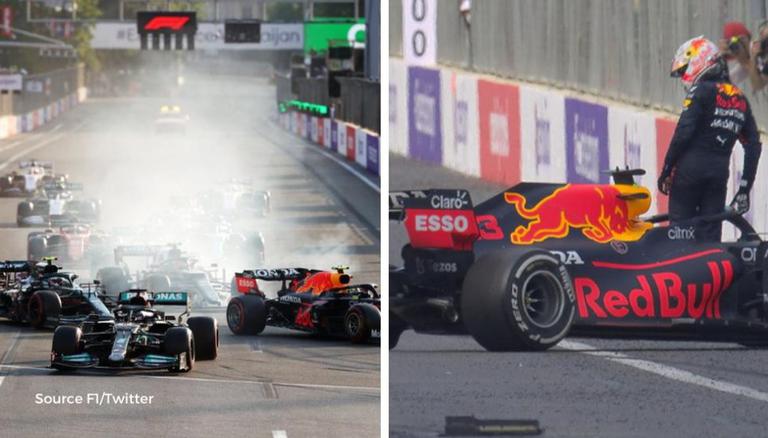 Hamilton (on the left) and Verstappen (on the right)

Lewis Hamilton had an excellent start to the Azerbaijan GP from second place on the grid as he overtook polesitter Charles Leclerc at the end of lap two for the lead. With the Monegasque slipping down the order, by the end of lap eight, both Red Bulls had also overtaken the Ferrari driver. With Hamilton and Max Verstappen now one and two, fans were hoping for an exciting Hamilton vs Verstappen battle in the race.

Hamilton blinked first as the Mercedes driver dived into the pits at the end of lap 11 for a cheap pit stop as Carlos Sainz's costly mistake in the Ferrari resulted in yellow flags. However, a long 4.6-second pit stop meant that both Red Bull drivers overcut him when they dived into the pits. However, the Azerbaijan GP took an unexpected turn when race leader Verstappen crashed out with four laps remaining in the race.

Max Verstappen looked poised to win the race following a slow pit stop for Lewis Hamilton. However, a horror left rear tyre failure at 200mph sent the Red Bull driver out of control and into the wall on the right-hand side of the start-finish straight. Verstappen's crash was similar to the crash that Lance Stroll had in his Aston Martin 15 laps ago. While Stroll's crash resulted in only a safety car, Verstappen's crash resulted in a red flag.

Verstappen crashes into the barriers on the main straight and is out of the race #AzerbaijanGP 🇦🇿 #F1 pic.twitter.com/cpiNig7eL8

With Verstappen out of the race, Hamilton had an excellent opportunity to grab the lead in the F1 standings 2021. Heading into the race, the Mercedes driver trailed the Red Bull driver by four points and a finish anywhere in the top seven would mean that Hamilton would regain the lead. However, once the race restarted after the red flag, Hamilton fell to last place.

Today was a humbling experience. We worked so hard to put ourselves back in the top 10 today after a rocky week here in Baku. We gave it our all today and a small error caused the brakes to switch off. Sorry to the team, we’ll come back stronger for the next race 🙏🏾 pic.twitter.com/oHy75S07L3

The red flag meant that a standing start would take place when racing resumed with Sergio Perez leading the pack. Hamilton seemed to have gotten off to an excellent restart as he launched an overtaking move on the Red Bull driver only to run down the escape road at the opening corner. Speaking after the race, Hamilton revealed that he accidentally hit a wrong switch on his steering wheel which "basically switches the brakes off," leading him to lock up and go down the escape road. With the Mercedes driver rejoining the grid in 16th, Perez grabbed a second F1 win. The Mexican was followed by Aston Martin's Sebastian Vettel and AlphaTauri's Pierre Gasly on the podium.

WE RECOMMEND
Lewis Hamilton would be no match for Max Verstappen if both were in Mercedes F1: N Piquet
Hamilton vs Vettel: F1 champion reveals greatest ever rivalry of his career