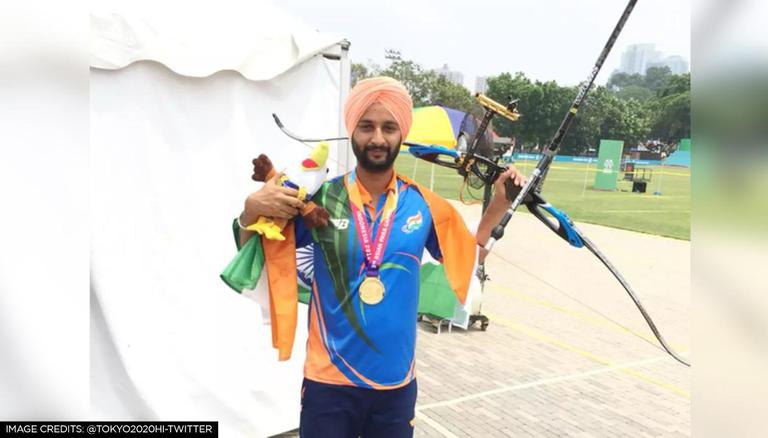 
The Indian contingent at the Tokyo Paralympics continues to make the country proud as archer Harvinder Singh beat Kim Min Su of South Korea 6-5 in a shootout to claim the bronze medal in the men's individual recurve open event. With this bronze medal, India's tally at the event is now at 13 and the third medal of the day. The 30-year-old had previously lost in the semifinal to USA's Kevin Mather 4-6 but fought hard in the bronze match play-off to clinch the medal. He becomes the first Indian ever to win a medal in Para-archery.

Harvinder started the day with a tough 6-5 win over Italy's Stefano Travisani and took the round of 32 match via shoot-off. He then beat Russian Olympic Committee's Bato Tsydendorzhiev in the round of 16 by 6-5 as well. After two hard-fought and close encounters, Harvinder beat Germany's Maik Szarszewski by a comfortable 6-2 scoreline in the quarter-finals before losing out on a spot in the final to the American, Mather.

Earlier in the day, Praveen Kumar clinched the Silver medal in the Men's high jump T44 final event at the Tokyo Paralympics. Kumar won the medal after having bettered his personal best and set a new Asian record with 2.07m. Kumar competed with Great Britain's Jonathan Broom-Edwards for the gold medal and fell just short of clearing the 2.10m.

READ | Will it rain medals for India at Tokyo Paralympics on Friday? Check action-packed schedule

Kumar cleared the 1.97m attempt with ease to join the first position along with Maciej Lepiato and Jonathan Broom-Edwards. However, the Indian jumper fell just short of clearing the 2.01m in his attempt. The jumper went back and completed the jump in his second attempt to once again match his fellow competitors. Kumar went on to clear the 2.04m attempt with ease. Kumar went on to better his personal best and set a new Asian record by clearing 2.07m in his second attempt. Lepiato finished third and took the bronze while Kumar competed with Broom-Edwards to clinch the gold. Both athletes fell short of clearing the 2.10m jump in their first attempts. However, Broom-Edwards cleared the jump in his second attempt to clinch the top medal. Kumar finished the event with silver for India's medal tally.

Also, Avani Lekhra scripted history yet again as she won a bronze medal in the Women's 50m rifle 3 positions SH1 on Friday. This is her second straight medal in the same week. The young shooter had won a historic gold at the women's 10m air rifle standing SH1·Shooting event on Monday, August 30. She became the first Indian woman to win two Paralympic medals in a single edition of the Games.

After the end of Shot 10, Avani Lekahara was at the fourth position with a score of 101. She was still at the fourth spot after the end of Shot 15 with a score of 101. There was no stopping her after Shot 25 as she was in the same position with a score of 252.4. However, in the next couple of rounds, she slipped down to the fifth and sixth positions and at one point was staring at elimination. But, that was not to be as she staged a remarkable comeback by clinching the fourth position (425.2) and eventually finishing at the third spot (435.7). He finished with 445.9 to finish at the top of the podium with a bronze.