Himachal CM congratulated Indian high jumper Nishad Kumar after he clinched a silver medal for the country in Men’s High Jump T47 at the Tokyo Paralympics 2020. 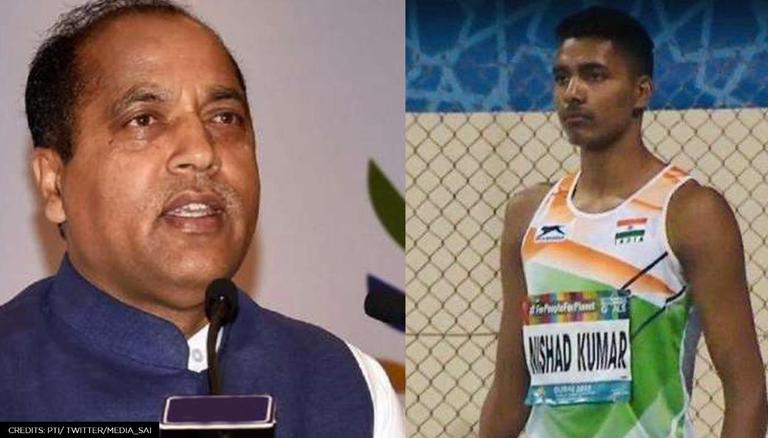 
Himachal Pradesh Chief Minister Jai Ram Thakur on Sunday congratulated Indian athlete Nishad Kumar after he clinched a silver medal for the country in Men’s High Jump T47 at the Tokyo Paralympics 2020. Taking to his official Twitter handle, the CM said that Nishad Kumar worked hard and got the country a silver medal in the event. Jai Ram Thakur said, "Our government will present an amount of Rs 1 crore to Himachal Gaurav Nishad, a resident of Amb".

The Himachal Pradesh CM said, "In the year 2019, our government also honoured Nishad with Himachal Gaurav Award. It is our aim to promote sports and increase the morale of the players so that Nishad and his talents continue to elevate the name of the state and the country."

More joyful news comes from Tokyo! Absolutely delighted that Nishad Kumar wins the Silver medal in Men’s High Jump T47. He is a remarkable athlete with outstanding skills and tenacity. Congratulations to him. #Paralympics

President Kovind tweeted saying Nishad has proved his excellence on the global stage. He also described Nishad's outing as a 'superlative performance'.

Congratulations to Nishad Kumar for winning the silver medal in men’s high jump at Tokyo #Paralympics. You have proved your excellence on the global stage, thereby bringing glory to India. My heartiest congratulations to you on your superlative performance and success.

Union Commerce and Industry Minister Piyush Goyal called it a memorable day, while Union Sports Minister Anurag Thakur congratulated him and informed that Kumar's 2.06m jump in the event equalled the Asian record set by him earlier in 2021.

Union Home Minister in a tweet in Hindi said that high jumper's hard work and dedication has paid off. "Due to this extraordinary achievement of yours, the head of every Indian citizen has risen with pride," he said. Union Parliamentary Affairs Minister Pralhad Joshi also congratulated the Indian star for bringing the country's second medal.

READ | Himachal Pradesh: Chandigarh-Manali Highway blocked for past 24 hours due to landslide