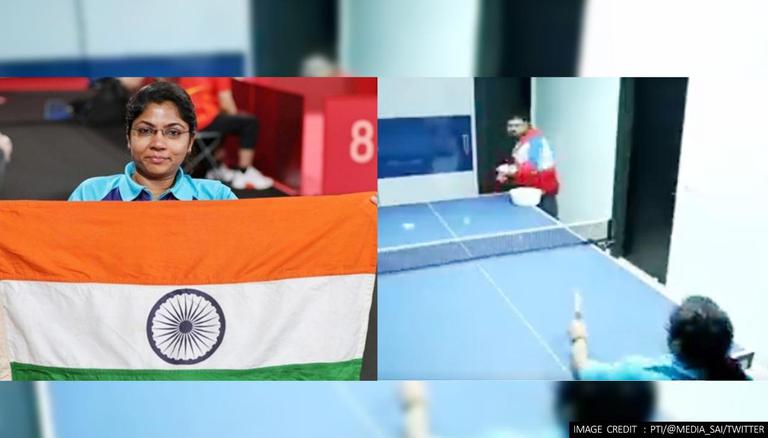 
Indian para-athlete Bhavina Patel earned India’s first medal at the Toyo Paralympics 2020 by winning the silver medal in the Women's singles class 4 Table tennis finals. She lost 7-11, 5-11,6-11 to World no. 1 Zhou Ying of China in the finals of the Table tennis event. This was her second loss to Ying after previously losing her first match of the Paralympics against the Chinese opponent. She opened the medal tally for India with her display of dedication and hard work. In a video posted by Sports Authority of India(SAI) on their Twitter handle before the finals match on Saturday, Bhavina Patel can be seen in a training session with her coach Lalan Doshi in Gujarat. In the 30-seconds video, Patel and Doshi are indulged in a high-speed rally displaying the level of skills possessed by the athlete.

This is just a trailor 😬

For the real show, set your alarm for 7:15 AM (IST) tomorrow

Check out @Bhavina59068010's training session 🔥🔥🔥 with her Coach in Gujarat, now imagine 💭 how exciting the final showdown is going to be 😁#Cheer4India #Praise4Para #Paralympics pic.twitter.com/yNluupZGoG

Patel was diagnosed with polio as a toddler and has been using crutches ever since. She got her interest tied on to Table tennis after she moved to Ahmedabad to pursue an ITI computer science course. However, it was tough for her to continue her newfound passion because she would change two buses, get into a couple of shared auto-rickshaws, and then covered the last mile by dodging Ahmedabad’s traffic on her crutches in order to reach the venue to practice. However, defeating all odds she went on to win a number of gold and silver medals for India in her professional Table tennis career.

An accomplishment that will echo through #IND 🗣️

Bhavina Patel receives her medal as she wins the nation's first #silver in #ParaTableTennis at the #Tokyo2020 #Paralympics ❤️pic.twitter.com/l4xzgHpYWK

The 34-year-old Table Tennis player for India, Patel reached World No. 2 ranking by winning the silver medal at the PTT Thailand Table Tennis Championship 2011 in the individual category. After winning several more bronze and silver medals in the coming years, she made her Paralympics debut in the Women’s singles class 4 Table tennis event in the Tokyo Paralympics 2020. The World no. 12 Bhavina lost to World no. 1 ranked Zhou Ying of China in three straight games within 19 minutes in the finals, earning the silver medal for India. Despite suffering a defeat in her opening match of the Paralympics from Ying, Bhavina made a strong recovery and became victorious in the next two matches.