Kevin Pillar injury update: New York Mets star was left bloodied after being hit by a 94mph fastball on the face during the game against Atlanta Braves 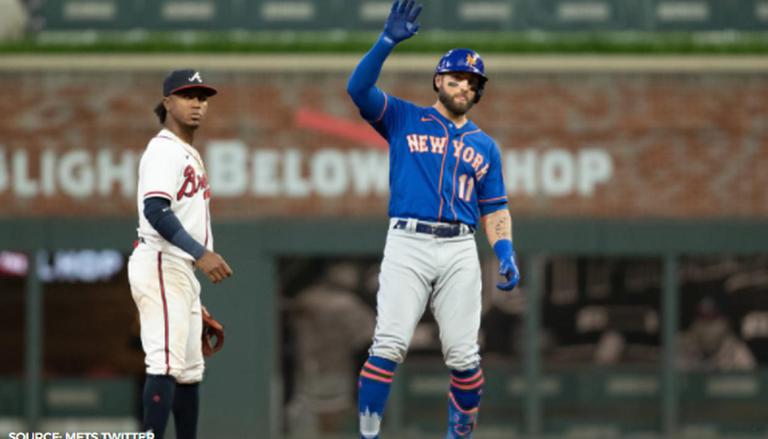 New York Mets suffered a major blow on Monday after outfielder Kevin Pillar left the game against Atlanta Braves. The incident happened during the event innings when a pitch from reliever Jacob Webb hit the Mets star on the full, leaving Kevin Pillar's face bloodied. Here's the Kevin Pillar injury update and what it means for the Mets as they look to climb up in the MLB standings.

Kevin Pillar left Monday's game against the Atlanta Braves bloodied after being hit by a fastball in the face by Jacob Webb. Webb drilled Pillar in the nose with a 94 mph fastball during the seventh innings of the clash. Pillar immediately fell to the ground, with blood pouring from his nose. He was quickly helped to his feet with towels covering his face as he was escorted off the field.

Fortunately, the 32-year-old was able to walk off the pitch go to the hospital and undergo a CT scan. As per the Kevin Pillard injury update, Mets manager Luis Rojas revealed that more details on the hit will be revealed on Tuesday. Pillard meanwhile took to social media and stated that while it was a 'scary moment' he was feeling better and doing fine.

Won’t be posting that vid, but Kevin Pillar just took 94 to the face and was gushing blood from his nose immediately. Walked off without any help. Hope he’s okay. That’s one tough dude to walk off on his own power like that. Very scary scene.

Rojas hailed Pillar as a warrior and believed that the way he got up after being hit on the face was at least a positive for the franchise. Mets pitcher Taijuan Walker said, "You never want to see anyone get hit in the face or in the head by a ball, especially coming at that velocity. Pillar is a tough guy. It's just one of those things where you just shake your head and you're sick to your stomach".

Atlanta Braves players, including Webb, watched the frightening scene in shock. As members of the Atlanta grounds crew covered the blood left in the batter's box area, Webb was removed from the game. Pillar's injury worsens injury problems for the Mets, who have a host of players missing out this term.

Walker himself exited Monday's game early pitching only three innings, allowing one hit and no runs, before leaving with tightness on his left side. He is set to undergo an MRI on Tuesday as per Rojas. Other notable absentees include outfielder Michael Conforto and second baseman Jeff McNeil, both of who were placed on the 10-day injury list after struggling with their respective hamstring issues. The Mets' injured list also includes third baseman J.D. Davis, outfielder Brandon Nimmo, reliever Seth Lugo and starting pitchers Carlos Carrasco and Noah Syndergaard, as well as a couple of big league backups in outfielder Albert Almora Jr. and infielder Luis Guillorme. Currently, the Mets (19-16) lead the NL East after a 3-1 win at Truist Park in Atlanta.