Star Indian weightlifter Mirabai Chanu was not at her best due to a wrist injury but still won a silver medal at the World Championships with a total lift of 200kg, here on Wednesday. 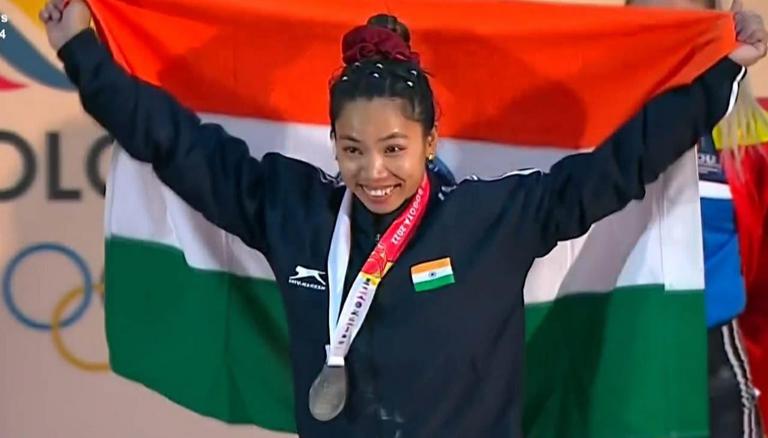 
Star Indian weightlifter Mirabai Chanu was not at her best due to a wrist injury but still won a silver medal at the World Championships with a total lift of 200kg, here on Wednesday.

The Tokyo Olympic silver medallist, competing in 49kg category, managed to lift 87kg in snatch and in clean and jerk her best effort was a lift of 113kg.

The Indian finished behind China's Jiang Huihua, who won the gold with a total effort of 206kg (93kg+113kg) while her compatriot and Tokyo Olympics champion Hou Zhihua 198kg (89kg+109kg) took home the bronze medal.

"We were not taking any pressure for this event. This is the weight Mira lifts regularly. From now we will start increasing the weights and improving," head coach Vijay Sharma told PTI.

Chanu, the 2017 world champion, had hurt her wrist during a training session in September. She had also participated in the National Games with the injury in October.

"We couldn't do much (about the injury) because we didn't want to skip the World Championships. Now, we will focus on her wrist because we have a lot of time before the next event," Sharma said.

While the 11-lifter field was highly competitive, most lifters refrained from stretching themselves. Zhihua even skipped her final clean and jerk attempt to settle for bronze.

Competing in her first international tournament since the Commonwealth Games, Chanu had an underwhelming snatch session. She started with an 84kg lift but her second attempt of 87kg was deemed a no lift.

In her final attempt, the 27-year-old, who had her wrist bandaged, wobbled a little but was able to hoist the 87kg barbell, which is a kilogram less than her personal best in the section.

Fifth after the snatch section, Chanu set the highest clean and jerk entry weight but her first attempt of 111kg was deemed a no lift as her left elbow wobbled a little.

The Indian camp challenged the decision but the judges upheld it.

However, Chanu, the world record holder in the category, succeeded in her final two attempts of 111kg and 113 kg to collect the overall and clean and jerk silver. He also took silver in snatch category.

It is the Manipuri's second Worlds medal, she had won a gold in 2017.

Medals are awarded separately for snatch, clean and jerk, and total lift in continental and World Championships. But, just one medal for total lift is awarded in the Olympics.

The 2022 World Championship is the first qualifying event for the 2024 Paris Olympics, where weightlifting events will be cut from 14 at Tokyo Games to 10.

However, it is an additional event and not a compulsory one.

Under the 2024 Olympic qualification rule, a lifter has to compulsorily compete in the 2023 World Championships and the 2024 World Cup.