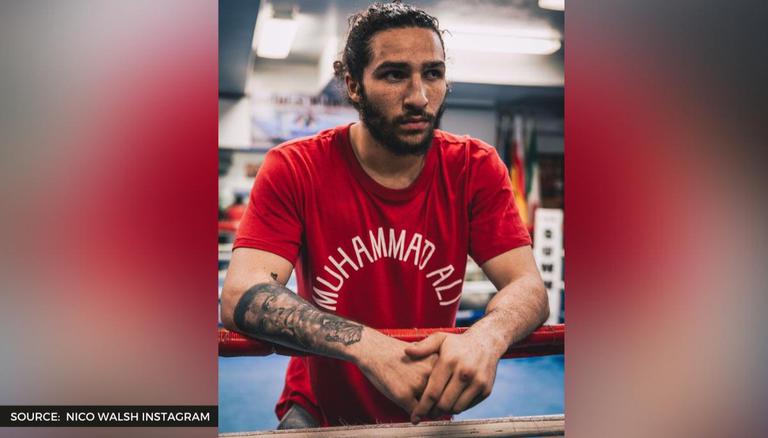 Ali Walsh is set to carry his family's legacy, with Muhammad Ali's grandson set to make his debut in the ring later this month. The 20-year-old has officially signed for Top Rank and will make his debut in August though his opponent has not yet been revealed. Here's a look at "Who is Ali Walsh?" and all the details surrounding the Muhammad Ali grandson Ali Walsh boxing debut.

Nico Ali Walsh, the 20-year-old grandson of Muhammad Ali, has signed a multi-fight promotional pact with Top Rank and will turn pro in a four-round middleweight bout on August 14. Ali Walsh is the son of retired US Marine Corps Sgt Robert Walsh and Rasheda Ali Walsh, Muhammad Ali's daughter and a noted public speaker. The 20-year-old was born on Chicago's South Side and now resides in Las Vegas, had roughly 30 amateur fights. As a young child in Chicago, he made his amateur debut at a benefit for St Baldrick's Foundation and broke out the Ali Shuffle.

Nico Ali Walsh, the 20-year-old grandson of the “The Greatest,” Muhammad Ali, has signed a multi-fight promotional pact with Top Rank and will turn pro in a four-round middleweight bout Saturday, Aug. 14 live on ESPN.

Muhammad Ali's grandson will be juggling classes and fighting as he embarks on his pro career under the guidance of Bob Arum, who promoted 27 of his grandfather's fights, including the epic "Thrilla in Manila" bout against Joe Frazier and the rubber match against Ken Norton at Yankee Stadium. Speaking of his deal, Ali Walsh said that he was doing what he loved, and added, "Signing with Top Rank was a dream come true". The 20-year-old said that he is honoured to carry his family's legacy and is a responsibility he wouldn't take lightly. Ali Walsh's uncle, Mike Joyce, brokered the deal with Top Rank and will serve as his nephew's manager, agent and attorney.

Joyce said that family history and legacy was a big factor in Nico signing with Top Rank and claimed that Arum was the right promoter for the 20-year-old. Arum joked that Muhammad Ali was a good fighter and hoped that Nico would emulate his success. He added that the youngster was a man of great character which was expected of Muhammad Ali's grandson. Ali Walsh has enlisted a pair of Kronk Gym's most notable figures for his in-ring development. Sugarhill Steward, nephew of the late Emanuel Steward and the head trainer of WBC heavyweight world champion Tyson Fury, will be his chief second.

Muhammad Ali is widely regarded as one of the greatest professional boxers of all time. The People's Champion has participated in 61 bouts, winning 56 of those, including 37 knockouts. Some of his famous fights include those against Joe Frazier, Ken Norton and Sonny Liston. Ali was the WBA heavyweight champion four times, while also was the WBC heavyweight champion twice.