Neeraj Chopra's Dream Gets Fulfilled As He Takes His Parents For 'first Flight', See Pic

The Olympic gold medallist, Neeraj Chopra, tweeted, posting beautiful pictures of his parents' first flight and wrote that his 'small dream' was fulfilled. 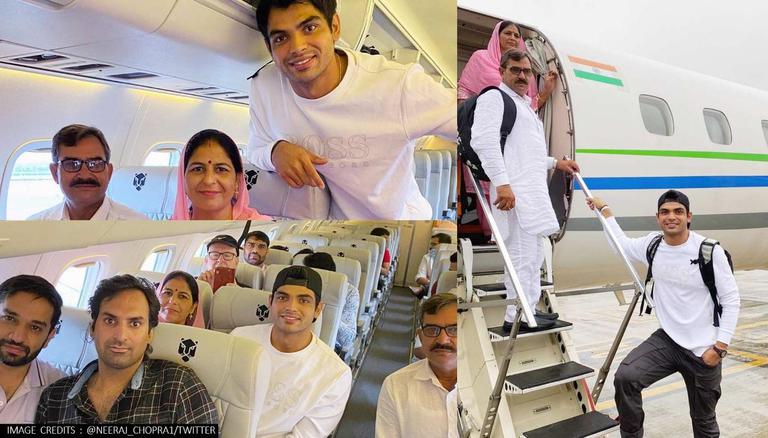 
On Saturday, Tokyo Olympics gold medallist Neeraj Chopra fulfilled a 'small dream' by taking his parents on their first flight. In a tweet, the gold medallist expressed gratitude towards citizens for 'prayers' and 'blessings' that led to fulfilling his dream today. Neeraj Chopra had ended India's 100 years wait for a medal in Athletics in the recent event of the Tokyo Olympics 2020.

A small dream of mine came true today as I was able to take my parents on their first flight.

When Javelin thrower Neeraj Chopra had clinched the first gold medal for India at the 2020 Tokyo Olympics earlier in August, the entire nation was filled with joy, and it took quite some time for Indians to sink in the extremely proud news. The champion's throw was 87.58 meters in the first attempt, and he broke his own qualification record. However, he was at the first position after all athletes finished their first attempts with an 87.03m throw. In the second attempt, he improved his performance with an 87.58m throw, maintaining the lead. His third attempt was 76.79 m.

Neeraj's next two attempts were not up to the mark, and he deliberately chose to cross over the line, so the distances did not count. Because of his second throw, he maintained the top spot to give India historic gold. Notably, Neeraj Chopra's gold is the only second for India in Olympics, after Abhinav Bindra in the Shooting.

Neeraj Chopra, who hails from Haryana, received a massive cash price of Rs. 6 crores with a class I category job as per the policy. Moreover, the CM had asserted, 'We will be building a Centre of Excellence for athletes in Panchkula, where he will be the head if he wants. He will be given a plot with a 50% concession, like other players'. Meanwhile, the Indian cricket board announced a Rs 1 crore cash reward for Neeraj Chopra for bringing home the gold. The Punjab Government announced a cash reward of Rs 2 crore. Several other rewards were announced, including businessman Anand Mahindra's announcement to gift the champion an SUV XUV 700.