Oleksandr Usyk Vs Anthony Joshua Rematch In April 2022? Here's Everything We Know

Oleksandr Usyk defeated Anthony Josuha in the 1st fight between both boxers in September this year and captured the WBA, IBF and WBO world heavyweight titles. 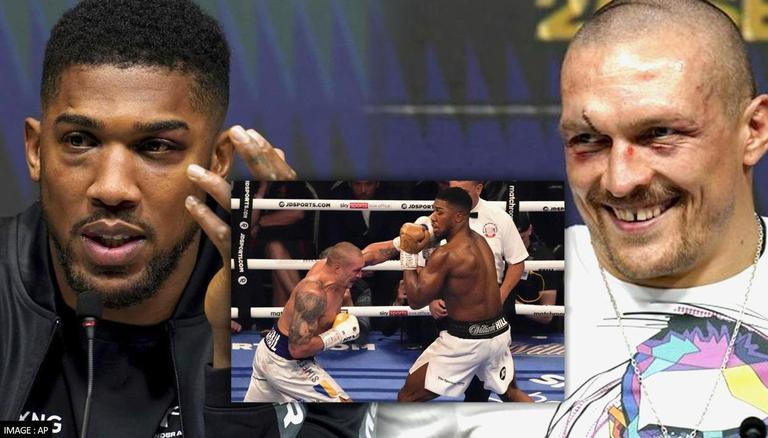 
On September 25, 2021, Ukrainian professional boxer Oleksandr Usyk defeated unified heavyweight champion, Anthony Joshua and retained his undefeated record, earning the WBA, IBF, and WBO world heavyweight titles in the process. Having faced the defeat after the fight that lasted for 12 rounds and after a unanimous decision against him, Joshua was quick to initiate the rematch clause and also said during the post-match press conference that there will definitely be a re-match.

Joshua’s promoter Eddie Hearn also weighed in on the same by adding that the re-match will likely be held in February or March. However, as per a recent report by Boxing Scene, Hearn has said that the rematch against Usyk is still on the track to take place in April 2022. As per Boxing Scene, speaking to IFL TV, Eddie Hearn said, “Obviously not much other than we got to get together and decide a date. April is realistic for that fight and where it’s going to be”.

Joshua’s promoter further added that the former two-time champion Joshua is a boxer who fights twice a year, but they feel it would be nice to fight thrice a year. However, he added that although they have received offers from around the world, yet the United Kingdom is likely to stage the fight. Further informing about talks with Usyk’s manager, Hearn said, “We have to sit down with [Usyk’s manager] Alex Krassyuk, and we’ll get Christmas out of the way and we’ll start moving forward with that because it’s time to start planning for that”.

Joshua was certain of the rematch ever since his second reign as the world heavyweight champion came to an end in September. He previously held the WBA (Super), IBF, WBO, and IBO titles from 2016 to 2019, before losing them to Andy Ruiz Jr. He regained the titles in a rematch in Saudi Arabia and reigned until one of the biggest fights of 2021. However, Usyk won the world heavyweight titles the third man, after Evander Holyfield and David Haye to win world titles at cruiserweight then heavyweight.