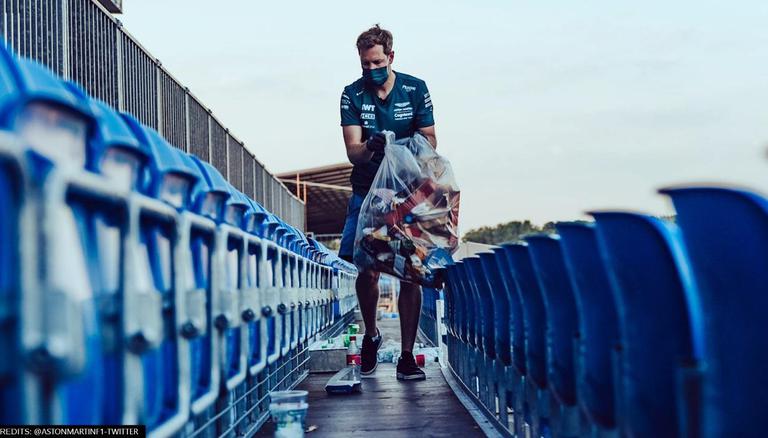 Aston Martin driver Sebastian Vettel had a disastrous race at the British GP as he had a spin while battling two-time Drivers' Champion Fernando Alonso before eventually retiring from the race. However, despite the disappointment, Vettel was not shy from showing his thoughtful side as he stayed back to collect litter from the grandstands. Fans appreciated the Aston Martin driver's actions by commenting on social media.

Sebastian Vettel has often used his platform to raise awareness about finding more sustainable solutions to protect our planet for the future. He has initiated several projects for the same. In Austria, the Aston Martin driver worked with school children to build a bee hotel before spending hours at the British GP track, clearing up rubbish left by 140,000 fans.

It is believed that the four-time Drivers' Champion will also remain in the UK and follow up on how the litter collected across the weekend will be recycled. Speaking of his kind gestures to reporters, Vettel said, "I think it is important that we all respect the environment and don’t rely on other people to clear up after us. We have to start somewhere and each one of us can make a difference now."

Well done Seb, have to admit, both my daughter and I went to the GP yesterday. We sat in the Copse stand and were amazed how much rubbish was left behind. It’s not difficult to take it out the stand with you to put in a recycle bin!

We took our rubbish home to get recycled & the stuff we couldn’t, went in one of the big bins, it would seem people just can’t clear up after themselves & that’s just laziness. Well done Seb 👏🏻👏🏻

Seb setting a great example to us all. What is wrong with people? Is it really that difficult to simply put your rubbish in a bin?

Despite a strong start to the weekend, Sebastian Vettel failed to deliver when it mattered most as he lost the car when going wheel to wheel with Fernando Alonso. As a result, the German dropped to the back of the pack and could not get close to the points. He eventually retired from the race due to a cooling issue with the car.

While reflecting on the disappointing race, Vettel said, "The weekend was looking promising and, without all the problems, I should have finished well inside the points. I am very disappointed to lose the car in a wheel-to-wheel battle with Fernando [Alonso]. I am not sure exactly what happened, but I misjudged it, lost grip, and spun. After that, I was right at the back. In the end we did not finish the race because the team retired the car with a cooling issue."