Sebastian Vettel has taken part in various environmental initiatives in the past that also included an internship in bio-farming last year during the pandemic. 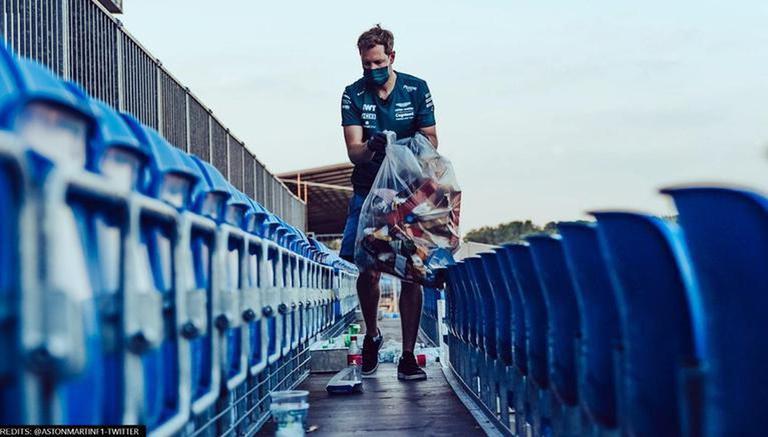 
Even though Sebastian Vettel has demonstrated his love for nature on various occasions in the past, he did make it clear that his actions were not a publicity stunt, but instead his genuine care for the environment.

The four-time Drivers' champion has taken part in various environmental initiatives in the past that also included an internship in bio-farming last year during the COVID lockdown. Moreover, even this year, he was seen collecting litter from the grandstands after the British Grand Prix at Silverstone, an action that was greatly appreciated by netizens on social media.

Sebastian Vettel explains need to take care of the environment

After the Russian Grand Prix last weekend, Sebastian Vettel explained the reasons for his interest in taking on 'credible projects' that help take care of the environment. According to Autosport, the Aston Martin F1 driver said, "I'm not doing these things to just have people look at it. The first thing that I always want to ensure is that actually whatever I do, it makes sense. And it actually helps the place where we are and whatever we are doing."

The German racer gave examples of the initiatives he has taken up in the past to explain his viewpoint. For example, before the Austrian Grand Prix this year, Vettel took part in an event where they built a bee hotel at a school. Speaking of the initiative, the 34-year old said that they had created 'some space or place for them to live and come back to.'

Vettel then went on to explain that it is not only important to speak about what should be done in practice, but lead by example when one thinks of an initiative for the greater good. "It's great if people are taking interest, and it, therefore, inspires others to maybe do similar, to think about it or question their activities and their behaviour, to just see how they could possibly contribute. But I think the first priority is always to make it credible for me, that it does make sense. It's great to say what we should do and talk about it, but I think you need to do it as well yourself. Otherwise, I think it's not authentic," added the Aston Martin F1 driver.

WE RECOMMEND
Formula One: Sebastian Vettel slams critics over wearing Pride shirt at Hungarian GP
Aston Martin F1 to race with special livery at Italian GP for promoting 'No Time To Die'
Sebastian Vettel advises Lewis Hamilton on how to drive alongside younger teammates
F1: FIA race director Masi admits, FIA ‘not concerned’ about Mazepin’s ‘bad boy’ image
Sebastian Vettel and Lance Stroll to continue with Aston Martin F1 team for 2022 season
Listen to the latest songs, only on JioSaavn.com