Qatar’s Mutaz Barshim and Italy’s Gianmarco Tamberi finished on top at the Tokyo Olympics after they agreed to share gold following a dramatic high jump final. 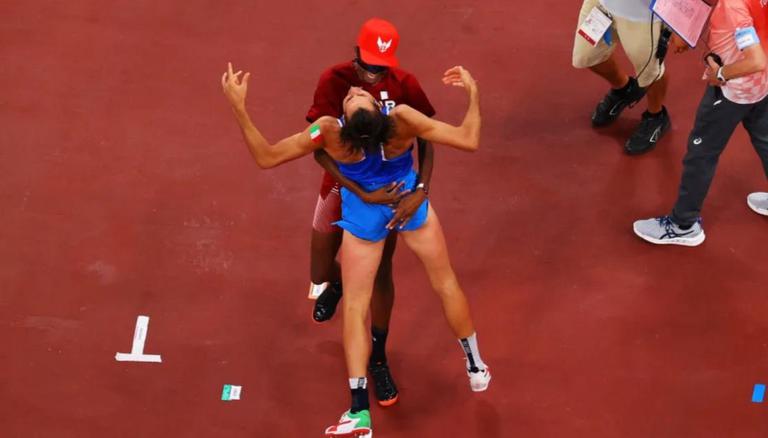 
Qatar’s Mutaz Barshim and Italy’s Gianmarco Tamberi finished on top of the podium at the Tokyo Olympics 2020 after they agreed to share gold following a dramatic end to the high jump event. Both Barshim and Tamberi registered a jump of 2.37m in their second attempt and were tied in the final. As the Olympic officials were preparing for the two to compete in a jump-off, Barshim asked if they could have two gold medals. The officials agreed to Barshim's request and decided to award two gold medals in the final event of the high jump.

Fave moment of the Olympics so far. Barshim (Qatar) and Tamberi (Italy) were tied in the high-jump final. The official is there talking about a prospective jump-off, but Barshim asks immediately: "Can we have two golds?" One look, no words exchanged, they know they're sharing it. pic.twitter.com/E3SneYFocA

In the video that is now going viral on social media, Italy's Tamberi can be seen hugging Barshim after the jump while the Qatari national tries to talk to one of the officials to ask whether the duo can share the gold medal. After the official nods his head in affirmative, Tamberi goes wild again and hugs Barshim before collapsing on the ground. According to reports, Barshim had helped the Italian jumper make a comeback from a career-threatening injury after the Rio Olympics.

Barshim, btw, had helped Tamberi come back from a career-threatening ankle injury since the last Olympics.

"After my injuries, I just wanted to come back, but now I have this gold, it's incredible. I dreamed of this so many times. I was told in 2016 just before Rio there was a risk I wouldn't be able to compete anymore. It's been a long journey," Tamberi was quoted as saying by olympics.com.

Maksim Nedasekau of Belarus had also registered a 2.37m jump in his second attempt but was asked to settle for bronze due to an earlier failure. Meanwhile, South Korea's Woo Sanghyeok and Australia's Brandon Starc registered a jump of 2.35m to come fourth and fifth respectively. Brandon is the brother of Australian cricketer Mitchell Starc.