Morhad Amdouni's act which has drawn widespread criticism from netizens was caught on camera and is being widely circulated across social media. Read on. 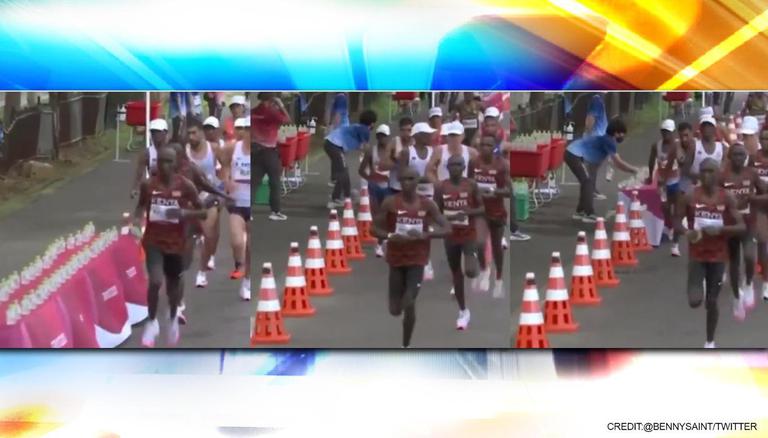 
French marathon runner Morhad Amdouni courted controversy in Tokyo Olympics on Saturday after he deliberately knocked over an entire row of bottles, in a bid to prevent other athletes from hydrating themselves during the 42-km men's marathon. The shocking incident, which has drawn widespread criticism from netizens was caught on camera and is being widely circulated across social media.

At the top of his pack, Morhad Amdouni along with several other athletes reached a pitstop which was laden with water bottles for players to quickly pick up and hydrate themselves with. The morning temperature of Sapporo had soared 27 degrees and the humidity was a brutal 81% as the runners wounded their way to the 28km mark. However, as athletes reached the much-needed hydration point, Amdouni extended his hand, seemingly to pick up a bottle, but instead began knocking all of them down, only to grab onto the last one for himself. The organizers were seen rushing to hold on to the toppling bottles and the French runner continued his run without batting an eye.

It is important to mention that as many as 30 athletes dropped out over the course of the race due to the unforgiving heat. Unfortunately for Amdouni, despite his tactic, he eventually fell behind and lost his lead only to finish in 17th place. Kenya's Eliud Kipchoge managed to win title.

The incident was strongly condemned by Olympic watchers who not only slammed the French runner for his disregard for 'fair play' but also called it 'the lowest thing' that they had ever seen in Olympics.

The act of knocking over a whole row of water bottles in terrible conditions by Morhad Amdouni was the lowest thing I've seen at the Olympics!

After this act of witchcraft, Morhad Amdouni still finished 17th in the Marathon. pic.twitter.com/JnsaAuhlEG

Meanwhile, Kenya's Eliud Kipchoge scripted history and managed to successfully defend his Olympic marathon title on Sunday by becoming the first athlete since 1980 to retain an Olympic marathon title. By virtue of this win in Tokyo Olympics, he is also only the third person to win successive Olympic marathons, finishing in two hours eight minutes 38 seconds in the men's 48 km marathon. The 36-year-old crossed the line one minute 20 seconds ahead of the Netherlands' Abdi Nageeye who settled for a silver. The race for bronze saw Belgian Bashir Abdi and Kenyan Lawrence Cherono in close competition but the former managed to one-up the Kenyan. Kipchoge finished in 2 hours, 8 minutes, 38 seconds.