In the video shared by #Tokyo2020 For India, Mary Kom's children can be seen boosting their mother's morale before she marches in the opening ceremony 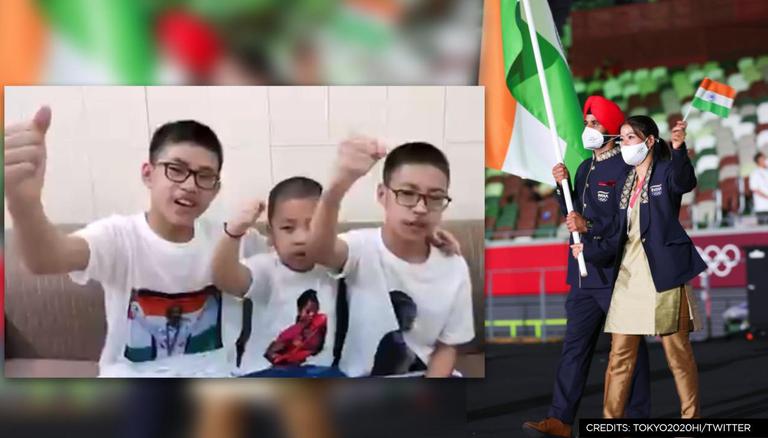 
Veteran boxer MC Mary Kom and Men's Hockey skipper Manpreet Singh on Friday carried the Tricolour and hopes of a billion as Tokyo Olympics 2020 has been officially declared open by the Japanese Emperor Naruhito. India had already announced that 38-years-old veteran boxer MC Mary Kom and Manpreet Singh will be the flag-bearers of India. However, Mary Kom got a surprising and warm video message amid the butterflies before the start of the Tokyo Olympics opening ceremony.

In the video shared by the official '#Tokyo2020 For India' account on Twitter, Mary Kom's children can be seen boosting their mother's morale before she marches in the opening ceremony. The video also outlines Mary Kom's achievement in the boxing world till now. In the video Mary Kom's children can be heard saying, 'You are the best mumma', 'Hi Mumma, don't you worry, we are with you', 'Hi Mamma, you are everything for us and I want you to win gold medal for all of us in the Tokyo Olympics', 'Super-Mom, Super Hero, Good Luck!'

Mary Kom is married to K Onler Kom and has three sons and 1 daughter.  The Tokyo Olympics might be the last chance for the 38-years-old boxer to end the medal drought in the mega-event.

Mary Kom Talks To PM Modi Ahead Of Tokyo Olympics

Before leaving for 'Mission Tokyo', Mary Kom had interacted with PM Modi. The Prime Minister started the conversation by saying that Mary Kom is the athlete who has been inspiring the entire nation with her boxing skills and achievements. Narendra Modi later asked Mary about her favourite punch and why exactly does she like this punch when it comes to professional boxing. To which Mary Kom replied, “Being a southpaw, I love using the hook.” She then explained why the hook attack is her favourite move by saying, “there are very few chances of missing that punch”.

PM Modi then asked the six-time World Amateur Boxing Championship winner about her favourite boxer. Mary Kom quickly replied, “Muhammed Ali is my favourite boxer. He has been an inspiration for me and was responsible for inspiring her to take up Boxing professionally.”