Tokyo Paralympics 2020: 'Unsatisfied' Avani Lekhara On The Hunt For A Third Medal 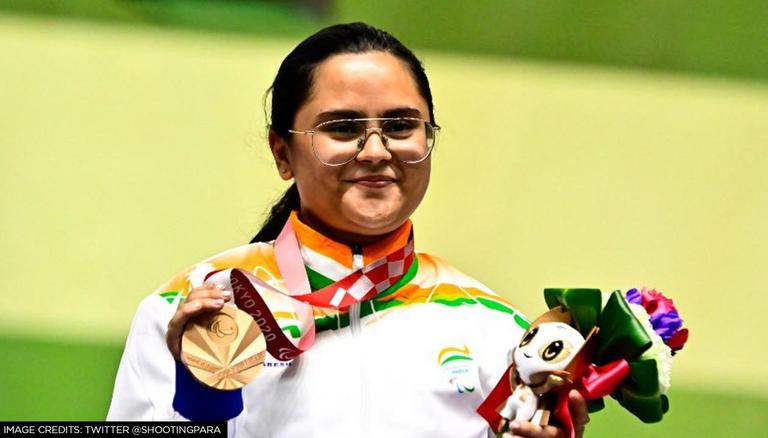 
India’s double medalist at the Tokyo Paralympics 2020, Avani Lekhara on Friday assured that she will give her 100 percent in the next event as she wasn’t satisfied with her Bronze medal-winning performance. She had earlier won the Gold medal in the Women’s 10m air rifle standing SH1 on 30 August. She will next compete in the Mixed 50m rifle prone SH1 qualification round on Sunday. As per PTI, the 19-year-old said she had it in her to perform better during her second event but was done in by the nerves.

The moment💜 Outstanding from Avani Lekhara. Only 19 yrs and the youngest competitor in the final, she can only get better. Two medals: a #Gold and a #Bronze already. #Tokyo2020 #Paralympics pic.twitter.com/Oi0YZoFisY

"I always wanted to be like Abhinav Bindra": Avani Lekhara

While talking in a virtual press conference facilitated by Eurosport and the Paralympic Committee of India, Lekhara said, “I was not satisfied with the gold only, when I won the gold, I wanted to fire that last shot better...so this bronze is definitely not satisfying I am keeping all the celebrations aside and focusing on the next match, so that is my goal, to give my 100 percent in the next event also.” Lekhara also expressed her admiration for Olympic gold-medalist Abhinav Bindra by admitting that she always wanted to become like him. She further said, “ When I read about Abhinav Bindra Sir’s autobiography, it really inspired me, because he gave his 100 percent to what he did and won India’s first individual gold medal. I always wanted to become like him and always wanted to make my country proud, so that is what inspired me a lot."

.@AvaniLekhara, take a bow young lady! A Bronze in 50m Rifle to add to your historic Gold at the #Tokyo2020 Paralympics. A performance for the ages! Many Congratulations #Praise4Para

On being asked what keeps her motivated, she replied, "For me, it was to give my best in standing. And I just thought everybody is feeling the same, so I just concentrated on myself, without thinking about others. I had never won a medal in sitting, this is my first international (medal), so I was more nervous. But I just had my focus on my shots. So last match I was focusing on one shot at a time and it just happened".Lekhara is coached by Sima Tharur who played a big role behind her impressive performance at the global sporting event. In conclusion of the press conference, she said, “We have a very wonderful team, my coaches, JP Nautiyal Sir, Subhash Rana Sir, Suma ma’am, my support staff, all the team members and the other athletes. We have a very good environment, very supportive, so that helps. If I had any problem, Suma ma’am kept me motivated and she helped me a lot. It is like a team effort.”