Participants vowed to take the opportunity of Tokyo Paralympic 2020 to further promote the realisation of a society inspired by the 'Unity in Diversity' motto. 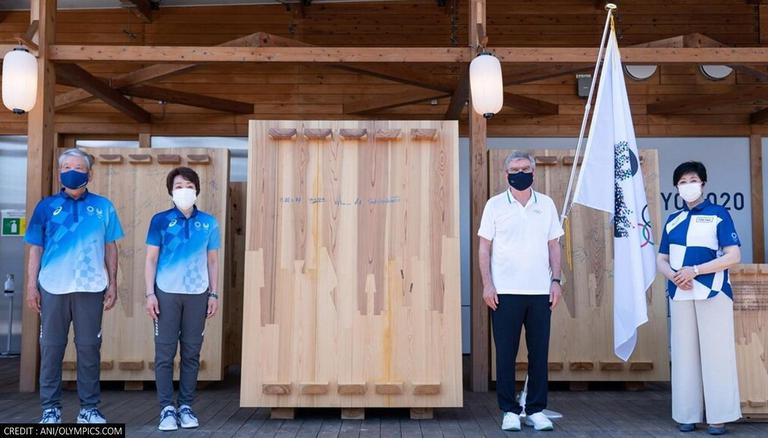 
With two days to go for Tokyo Paralympics 2020, the International Paralympic Committee (IPC) and the Tokyo 2020 Organising Committee on Saturday staged a ceremony at the Village Plaza in the Paralympic Village during which a Paralympic Mural was inaugurated. The ceremony was attended by IPC President Andrew Parsons, Tokyo 2020 President Seiko Hashimoto, Governor of Tokyo Yuriko Koike, Tokyo 2020 Village Mayor Saburo Kawabuchi, and IOC President Thomas Bach. The participants pledged to take the opportunity of the Paralympic Games in Tokyo to further promote the realisation of a society inspired by the motto of 'Unity in Diversity', a society where there is no discrimination against differently-abled people.

Addressing the athletes who are about to compete in Tokyo Paralympics 2020, IOC President Bach said, "Today we are inaugurating the Olympic Truce Mural here at the beating heart of the Olympic Games, the Olympic Village. It is here where the Olympic spirit comes to life. The athletes show us that, despite all our differences, it is possible for humankind to live together in peace. This is our Olympic message: yes, it is possible to compete with each other, even for the highest prize, but at the same time to live together peacefully under one roof in the Olympic Village."

"It is in this Olympic spirit that I invite you to leave your signature on the Olympic Truce Mural, to show your commitment to make a better and more peaceful world through sport,” added Bach.

Athletes and others, involved in the Paralympic Games, will be able to sign the Mural in order to show their support for the UN Convention on the Rights of People with Disabilities and the United Nations' Sustainable Development Goals. Earlier this week, the IPC launched WeThe15, a 10-year-long campaign that aspires to be the biggest ever human rights movement to represent the world's 1.2 billion persons with disabilities.

READ | Tokyo Paralympics 2020: No fans allowed in stadiums due to surge in COVID-19 cases

What is Tokyo Paralympics Mural?

The Murals were made using a traditional Japanese construction method called 'tsugite', in which different pieces of wood, each with a unique shape, are combined and connected. They aim to serve as a reminder of the importance of recognising "celebrating diversity, connecting people, and bringing harmony".

Following the success of the Tokyo Olympics 2020, the Japanese capital is all set to hold the Paralympics. The 2020 Tokyo Paralympics will start on August 24 and will conclude on September 5, 2021. The Games will feature 539 events across 22 sports to be hosted at 21 venues.

The event will see participants like legendary swimmers USA's Mckenzie Coan and Jessica Long, and Brazil's Daniel Dias. Also, two-time Paralympic champion Zahra Nemati will try to win another gold in archery. Indian Para-swimmer Niranjan Mukundan will also take part in the 50 m butterfly event. High jumper Mariyappan Thangavelu will be India's flagbearer in the Tokyo 2020 Paralympics. He is one of the four Indian medallists at Rio 2016. Two-time Paralympic gold-medallist Devendra Jhajharia will also participate in the Games.