PM Narendra Modi has given special mention to Bhavina Patel as she qualified for the Tokyo Paralympics 2020 gold medal match with a 3-2 win over Miao Zhang. 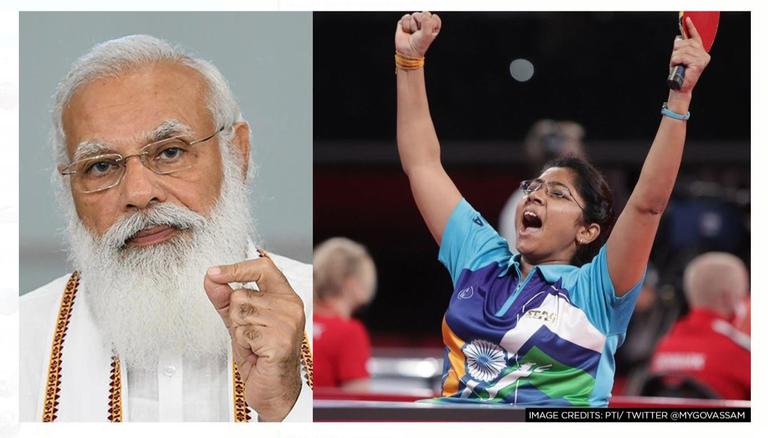 Taking to Twitter, PM Modi congratulated Bhavina Patel for playing 'excellently' and then added that the entire nation is praying for her success and will also be cheering for her on Sunday when she competes in the gold medal match.

PM Modi then urged the promising paddler to give her best and play without any pressure.

"Your accomplishments inspire the entire nation", he added.

The entire nation is praying for your success and will be cheering for you tomorrow. Give your best and play without any pressure. Your accomplishments inspire the entire nation. #Paralympics

Bhavina Patel staged a brilliant comeback despite going down in the first game as the second set ended at 5-5. However, she showcased a dominant performance in Game 3 with a 5-1 scoreline. The Indian paddler made things even tougher for her Chinese counterpart in Game 4 as the contest went into the decider. In the fifth and final set, it was Bhavina Patel once again who was dominant right from the beginning as Miao Zhang had no answers and ended up losing the set and the match.

Bhavina Patel will now be gunning for gold against China's Zhou Ying on Sunday.

On Friday, Bhavina scripted history at the Tokyo Paralympics as she became the first Indian to enter the semi-final with a dominating win over World Number 2 Borislava Rankovic of Serbia in the women's singles Class 4 event. With the win in the quarter-final, Bhavinaben Patel also ensured India its first medal at the Tokyo Paralympics.

World No.8 Bhavinaben Hasmukhbhai Patel is a very accomplished para-athlete and boasts of having won multiple championships. In her 13-year career so far, the paddler has competed in 28 tournaments and has won 26 of them. They include five gold, 13 silver, and, eight bronze medals respectively.