WFI President Brij Bhushan Sharan said the accusations made by the top Indian wrestlers were all a part of a big controversy against him. 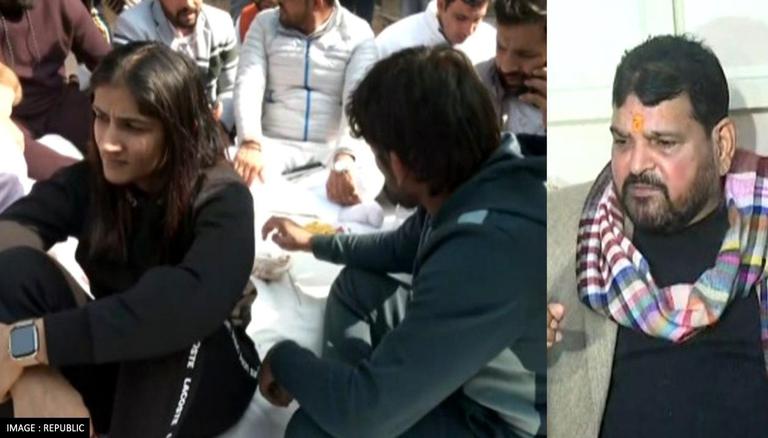 
After top Indian wrestlers made grave accusations against the President of the Wrestling Federation of India, Brij Bhushan Sharan Singh said that it was a 'big controversy'. Addressing the media, the Member of Parliament said that a big personality was involved in this conspiracy, as a part of which he was accused of sexual harassment by Vinesh Phogat and Sakshi Malik.

"These players, who till yesterday could not stop singing praises in my name...Ask any of these players, go to their village and ask. Their parents of the players who used to come with them, I used to specifically honour them. I used to tell the country, 'look, her grandmother has brought her...'" he said while addressing the media.

Protesting at Jantar Mantar, Vinesh Phogat along with Sakshi in a media address had alleged that women wrestlers have been sexually harassed at national camps by coaches and also the WFI President.  “WFI president indulges in sexual molestation of female players and coaches. I am saying this now, but I don't know if I will be alive tomorrow. Some of the female wrestlers sitting here have also experienced molestation,” Phogat said.

READ | 'Our fight not against the government or SAI': India's top wrestlers stage protest against WFI President's 'dictatorship'

“We are not fighting for ourselves, we are fighting to save wrestling. He interferes in our personal lives and wants to know who our boyfriend or girlfriend is. He keeps asking about our marriage and other personal stuff,” the Indian wrestler added.

When asked about that, Brij Bhushan said, "Sexual harassment is a big allegation. How can I take action when my own name has been dragged into this? I am ready for an investigation."

"There has been no incident of sexual harassment. If such a thing has happened, then I will hang myself," he further said to the reporters.

Meanwhile, the Delhi Commission of Women (DCW) has taken cognizance of the accusations made and issued notice to the Ministry of Sports. Taking to Twitter, DCW chairperson Swati Maliwal, said, "Olympians Wrestler Sakshi Malik, Vinesh Phogat, and Bajrang Punia, who have brought laurels to the country, are forced to protest today. They say that the Wrestling Federation of India's President and coaches sexually exploit the players."