Mercedes F1 have revealed their intention to appeal against Max Verstappen's controversial win at the Abu Dhabi GP after their previous protests were shot down. 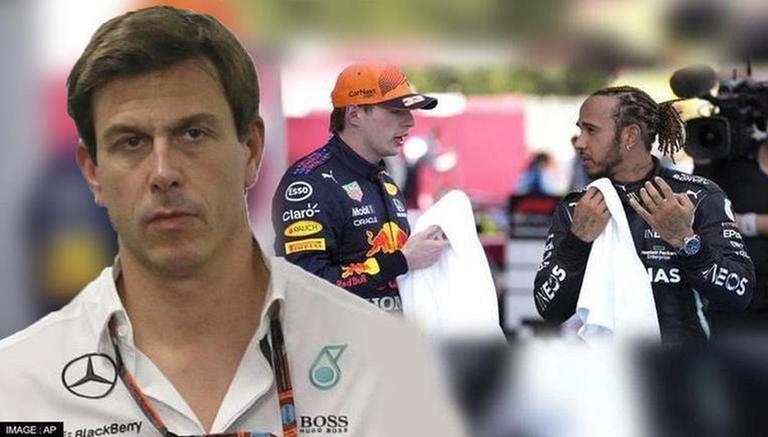 
Mercedes F1 have revealed their intention to appeal against Max Verstappen's controversial win at the Abu Dhabi GP after their previous protests were shot down. The Silver Arrows had requested for an investigation into two incidents that perhaps unfairly helped the Dutchman to win the title over Lewis Hamilton.

Even though no further investigation is being carried out, the latest Twitter thread explains in detail why Mercedes F1 may have 'strong grounds for appeal' against Verstappen's victory if they choose to do so.

Mercedes F1 may have good reason to appeal Verstappen's win

One netizen took to their Twitter account and provided a lawyer's perspective to explain why they believe Mercedes F1 have good reason to appeal the incident against Max Verstappen. Among the four reasons they mentioned, the first stated that 'any' does not mean 'all.' The major talking point from the race had been race control's decision to allow five lapped cars to overtake instead of all the drivers that had been lapped.

Explanation of why Mercedes has strong grounds for an appeal: (a lawyer’s perspective) - THREAD

1. “Any” does not mean all, however it does mean “of all cars, those that fit into the relevant category” i.e. cars which are lapped, this could mean zero cars, 10 cars etc. 1/5 #F1 pic.twitter.com/Djd5R7TgQv

Meanwhile, three other pointers suggested that race control does not have the authority to 'override' any F1 rules and that they had to be 'applied correctly and in full.' Moreover, no rule has 'greater weight than another.' As a result of this rule, several netizens believed that race director Michael Masi did not implement the rules in full and instead modified them, thereby resulting in the massive F1 controversy.

2. This isn’t disputed, when the safety car “in this lap” message appears then the safety car does have to return on that lap, however this does not address the fact the message shouldn’t have been put up when it was / a partial application of 48.12. 2/5

3. As above. Also note that nowhere does it suggest that any regulation has greater weight than another or the ability to “override” - the rules work on the assumption that all other rules are applied correctly and in full. 3/5

Mercedes F1 lodged a double protest within the required 30-minute window after the Abu Dhabi GP and did not make any further comment on the issue until a hearing was conducted. According to the details of the protest, one involved Article 48.8 of the FIA regulations that state, "no driver may overtake another car on the track, including the safety car until he passes the line (see Article 5.3) for the first time after the safety car has returned to the pits." The Silver Arrows made this protest as Max Verstappen was seemingly alongside Lewis Hamilton when the two cars approached Turn 12 before the restart on the final lap.

Meanwhile, the second protest was based upon Article 48.12 which stated, "any cars that have been lapped by the leader will be required to pass the cars on the lead lap and the safety car." Race control had only given permission for five lapped cars to overtake - Lando Norris, Fernando Alonso, Esteban Ocon, Charles Leclerc and Sebastian Vettel.