Former interim lightweight champion Tony Ferguson lashed out at Conor McGregor and his sports management team continuing the war of words on Twitter.

It appears the result at UFC 249 set a number of things in motion while simultaneously riling up a number of UFC superstars. Over the last two days, Conor McGregor, Dustin Poirier, and Khabib Nurmagomedov and his manager Ali Abdelaziz have been involved in a war of words on Twitter. However, just when it seemed like things had cooled down, Tony Ferguson came into the mix by slamming Conor McGregor with his recent tweet. 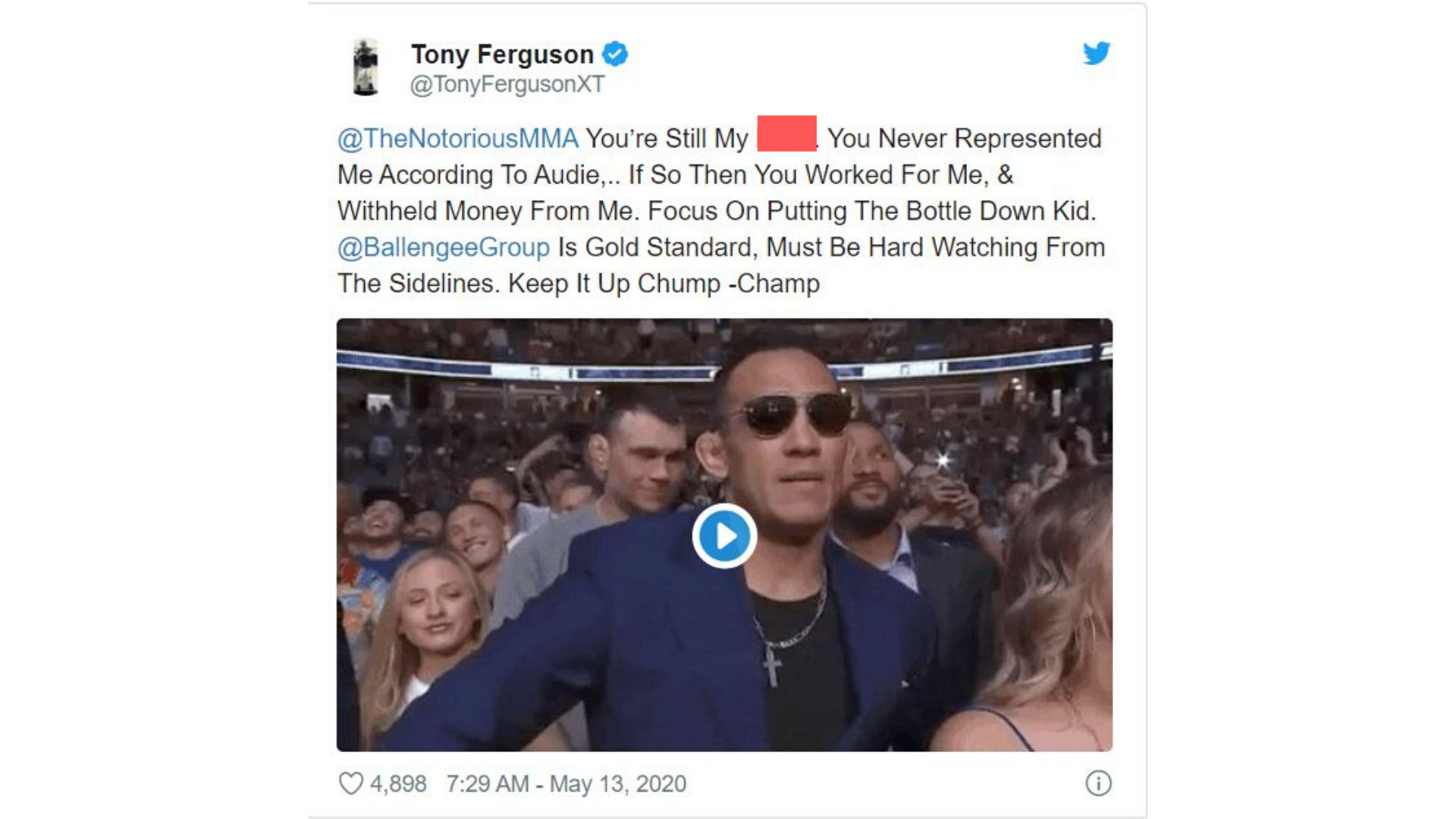 After being on the wrong side of a beatdown against Justin Gaethje at UFC 249, Tony Ferguson went on to take a dig at Conor McGregor with his recent tweet. Apart from calling Conor McGregor “a bi***” he also suggested the Irish fighter keep the ‘bottle’ down. Tony Ferguson appeared to respond to the Conor McGregor Twitter jab fired at him earlier this week.

I love Tony. We represented him amazingly at Paradigm sports and were betrayed for a promise of a baseball contract. But frame and preparation here was just embarrassing. His methods and conversation are humorous/enjoyable but he was never the level perceived. Although tough.

Conor McGregor seemingly did not take kindly to being out of the spotlight amid all the attention focused on UFC 249 as he took to Twitter to stay in the headlines. The Conor McGregor Twitter statement indicated that 'The Notorious' is planning to fight in July. However, the former UFC double champion did not reveal who he wants to face next inside the octagon.

See you in July ðŸ‡®ðŸ‡ªâ˜˜ï¸ðŸ‡ºðŸ‡¸

PEOPLE HAVE PLEDGED SO FAR
LATEST NEWS
View all
3 hours ago
Lgt vs hae dream11 prediction, team, top picks, korean baseball league live
4 hours ago
Nrl to make against-the-odds return for sports-starved australians
1 hour ago
Dc reveals khabib nurmagomedov is training hard despite ramadan and father's illness
31 mins ago
Mike tyson shocks fans after yawning during title match at aew double or nothing
5 hours ago
Squash player fadte returns to goa after being stuck in uk