What happened to Albert Pujols? On Thursday, the Angels said Albert Pujols was designated for assignment early in the final season of his 10-year, $254M deal. 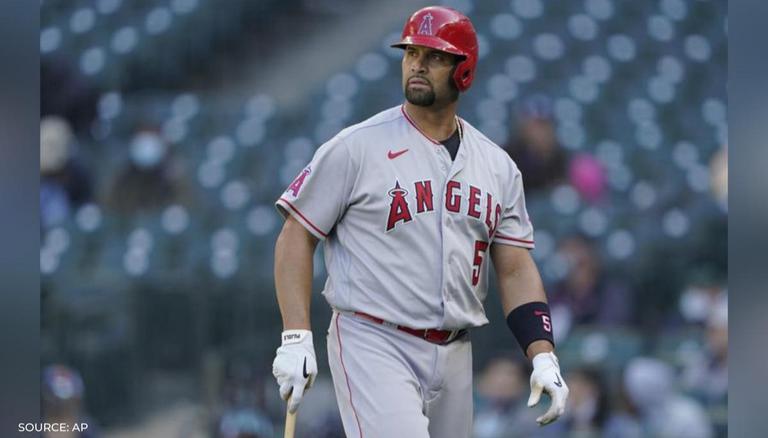 Earlier on Thursday, the Los Angeles Angels sent shockwaves across the MLB community when they designated future Hall of Famer Albert Pujols for assignment, leaving the 41-year-old’s playing future in limbo. Pujols was in the final year of his historic 10-year, $254 million deal, which includes a 10-year, $10 million personal services contract once his playing days are over. However, the AL giants have now seemingly decided that they could use Pujols' roster spot on another player. So fans have queried - 'What happened to Albert Pujols?' and 'Why did Angels release Albert Pujols?'

On Wednesday night, after watching another game from the bench, Albert Pujols was summoned into a room with Los Angeles Angels president John Carpino and general manager Perry Minasian. The veteran slugger was then informed that the near-decade Albert Pujols contract was coming to an abrupt end. The following morning, the Angels announced they had designated Pujols for assignment, a procedural move that will lead to Pujols' release by the end of the week, barely two months into the last season of a 10-year, $254 million deal.

The #Angels announced today that the Club has designated Albert Pujols for assignment. pic.twitter.com/SCRz78kXcf

Angels owner Arte Moreno, in a statement, thanked Pujols for his years of service with the franchise, "The Angels Organization proudly signed Albert Pujols in 2011, and are honoured that he has worn an Angels jersey for nearly half of his Hall-of-Fame career. Albert's historical accomplishments, both on and off the field, serve as an inspiration to athletes everywhere, and his actions define what it means to be a true Superstar. Since his Rookie of the Year Season in 2001, Albert and his wife Deidre have generously given their time and resources to countless charities throughout the world. We are thankful to the entire Pujols Family."

Pujols recorded five long balls through his first 24 appearances for the Angels this season, which equates to a 34-home run pace over a full campaign, but his other numbers lagged. He compiled a .622 OPS and had just two games with more than one hit as part of a .198 batting average.

READ | What happened to Dustin May? Is Dodgers pitcher's MLB season over?

Drafted by the Cardinals in the 13th round of the 1999 MLB Draft, Pujols helped lead St. Louis to three World Series, winning championships in both 2006 and 2011. An All-Star in nine of his first 10 seasons, Pujols left St. Louis as a free agent after the Cardinals’ 2011 championship season. The Albert Pujols contract was a 10-year, $254 million one with the Angels.

READ | 'MLB The Show 21' Crashing: Here's how you can fix this simple issue on your console

The Albert Pujols stats with St. Louis involved 445 homers and 1,329 RBIs in 1,705 games, ranking second to Hall of Famer Stan Musial in franchise history in both categories, while his 1.037 OPS trailed only Mark McGwire (1.111). Although Pujols remained productive with Los Angeles, he never regained his MVP form during his nine-plus seasons with the Angels. He finishes his tenure in Anaheim with 222 home runs, 783 RBIs and a .758 OPS in 1,181 games.