Where Do Neeraj Chopra And Rohit Yadav Stand In Final Qualification Standings At World Athletics Championships?

Neeraj Chopra finished second best overall behind defending champion Anderson Peters of Grenada, who topped Group B with his opening round effort of 89.91m. 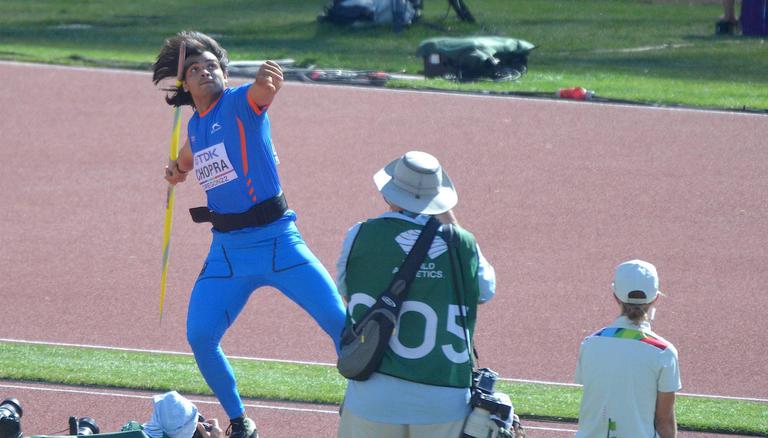 
Olympic champion Neeraj Chopra qualified for his maiden World Championships final with a stunning first attempt throw of 88.39m as India witnessed a historic day at the event with two of its javelin throwers making it to the medal round here.

The 24-year-old Indian superstar, the hot favourite for a medal, opened the Group A qualification round by sending his spear to 88.39m for his third career-best throw, here on Thursday.

Chopra finished second best overall behind defending champion Anderson Peters of Grenada, who topped Group B with his opening round effort of 89.91m.

"It was a good start. I'll give my 100% in the final. We'll see. Every day is different. I'll just give my best. We don't know who can throw far on any given day," Chopra said after his event.

"There is a little bit of zigzag in my run-up. I shook a little bit, but it was a good throw. There are so many throwers in good shape now. Five-six throwers have thrown PBs this year. They are all in excellent shape," he added.

Another Indian in the fray, Rohit Yadav also made it to the finals after finishing sixth in Group B qualification round, and 11th overall, with his first round throw of 80.42m.

His second throw was a foul and he managed a modest 77.32m in his last attempt. The 21-year-old Indian had recorded a season's and personal best of 82.54m while winning a silver at the National Inter-State Championships last month.

Those who cleared 83.50m or the 12 best performers across two qualification round groups qualified for the final to be held on Sunday (7:05am IST).

Chopra, who has a personal best of 89.94m, had competed in the 2017 London World Championships with the hope of at least making it to the finals but managed only 82.26m to fall short of the automatic qualification mark of 83m.

He had missed the 2019 World Championships in Doha as he was recovering from an elbow surgery.

In other events, Eldhose Paul became the first Indian to qualify for the triple jump final at the World Championships with an effort of 16.68m. He finished sixth in Group A qualification round and 12th overall to make the cut for Sunday's final (6:50am IST).

The 25-year-old Paul, who reached here just a few days ago due to visa issues, has a season's and personal best of 16.99m which he had recorded while winning gold in the Federation Cup in April.

The two other Indians, Praveen Chithravel and Abdulla Aboobacker, disappointed as they failed to make it to the finals after below-par jumps of 16.49m and 16.45m respectively. Chitravel finished eighth in Group A, and 17th overall, while Aboobacker ended at 10th in Group B, and 19th overall.

Those who cleared 17.05m or the 12 best performers across two qualification round groups qualify for the finals.

Chitravel had produced the third longest-ever jump by an Indian with a stunning effort of 17.18m to clinch gold at the National Inter-State Senior Athletics Championships in Chennai last month. Aboobacker, who had won silver in the Chennai meet, has a season's and personal best of 17.19m.

In the men's javelin throw event, Tokyo Olympics silver medallist Jakub Vadlejch of Czech Republic also qualified for the finals with a first round throw of 85.23m. He was the second automatic qualifier from Group A, along with Chopra, and fourth overall.

Chopra has beaten Peters twice this season while the 24-year-old Grenadian prevailed over the Indian once -- at the Diamond League Meeting in Stockholm on June 30 -- in their three meetings before the World Championships.

World leader Peters has thrown 90m-plus thrice with the best being a monster throw of 93.07m while winning gold at the year's first Diamond League Meeting in Doha in May. After winning the gold in Stockholm, he had said he was not fully fit due to a back problem.

Pakistan's Arshad Nadeem also made it to the finals after finishing fourth in Group B, and ninth overall, with a best throw of 81.71m.

If Chopra wins in the final on Sunday, he will become only the third male javelin thrower to follow Olympic success with World Championship gold after Norway's Andreas Thorkildsen (2008-09) and world record holder Jan Zelezny of Czech Republic in 2000-01 and 1992-93.

Chopra had become the first Indian track and field athlete to bag an Olympic gold last year and is also the reigning Commonwealth Games and Asian Games champion.

He has been in tremendous form this season having broken his own national record twice. He did that first in his season-opening outing at the Paavo Nurmi Games at Turku in Finland with a throw of 89.30m on June 14.

He bettered his national mark again during the prestigious Diamond League Meeting in Stockholm on June 30 with an effort of 89.94m, just 6cm shy of 90m, the gold standard of the javelin world.

In between, he won gold at the Kuortane Games in Finland in a world-class field with a throw of 86.79m.

Chopra's best coming into this season was the 88.07m he had produced at the Indian Grand Prix series in Patiala in March 2021.

Trinidad and Tobago's 2012 Olympics gold winner Keshorn Walcott failed to make it to the finals, finishing eighth in Group A, and 16th overall, with a best throw of 78.87m.