WWE legend Undertaker attended the Dallas Cowboys vs Denver Broncos match along with his wife Michelle McCool and also honoured members of the US military. 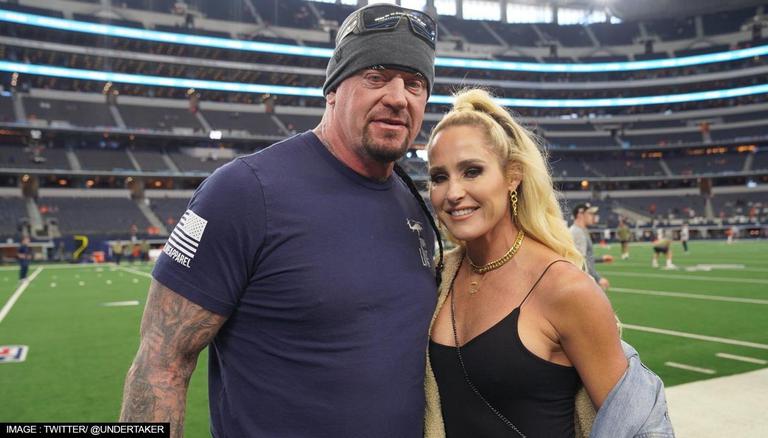 
The legendary Undertaker may not be wrestling inside the WWE ring anymore; however, 'The Deadman' did make a surprise appearance on the sidelines of the NFL game between the Dallas Cowboys and Denver Broncos. It has been reported that WWE is set to host a WrestleMania 38 pre-sale party at AT&T Stadium the event which will be attended by the Undertaker. The AT&T Stadium will be the venue for WWE's biggest pay per view event The Wrestlemania 38.

As per the image shared by WWE, Undertaker attended the Dallas Cowboys vs Denver Broncos match along with his wife Michelle McCool and also took the time to interact with fans and honour members of the United States Military who were in attendance. The Undertaker was also seen chatting with Cowboys linebacker Micah Parsons.

The @undertaker was on the sidelines ahead of today’s @dallascowboys game and spent some time recognizing members of the United States Military! pic.twitter.com/YsJ8DmcBsE

As per the report from wrestlinginc.com the WrestleMania 38 on-sale party will feature matches with WWE NXT Superstars, autograph signings, activities for kids, music, official WWE merchandise and more. Fans will also be able to purchase their mobile WrestleMania tickets before they go on sale to the general public on Friday, November 12.

Jonathon Cooper and the Denver defence pestered Dak Prescott a lot more than the rookie’s first two sacks in the NFL showed. The final score wasn’t much of a reflection of the Broncos’ dominance either. Teddy Bridgewater threw for a touchdown and had a sneak for another, and the Broncos stymied the NFL’s No 1 offence when it mattered in a 30-16 victory Sunday, ending the Cowboys’ six-game winning streak. Prescott returned after missing a game with a strained right calf but couldn’t get the Cowboys (6-2) moving until two meaningless late touchdowns that merely avoided what would have been their worst shutout loss at home since 1985.