Andy Murray defeated 30th seed, Carlos Alcaraz, 5-7, 6-3, 6-2 in the round of 64 of the Indian Wells Masters tournament which included an underarm ace. 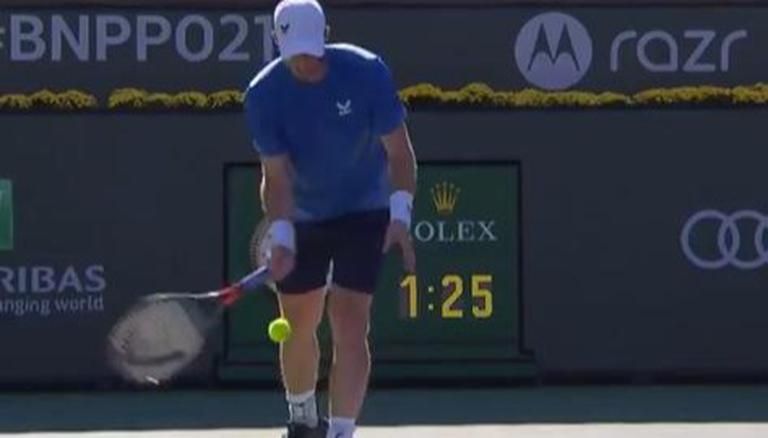 
An unseeded Andy Murray defeated 30th seed, Carlos Alcaraz, 5-7, 6-3, 6-2 in the round of 64 of the Indian Wells Masters tournament. It was not without slight controversy though, as the British tennis star hit an underarm ace. The unorthodox shot came after Alcaraz was standing quite far behind the baseline to get a better return on Murray's serve, but the Brit had other plans as he hit an underarm serve that Alcaraz was not at all prepared for.

The reaction to *that* underarm serve from the man himself...@andy_murray #BNPPO21 pic.twitter.com/C368Mg2Mfx

Murray opens up about underarm ace

Murray was quizzed about the underarm serve that got him an ace after his win, to which he responded by arguing that Alcaraz was standing further back to return his serve on a "painfully slow" court where he was not getting many free points on his first serve. Murray got only three aces in the entire match including the underarm serve one. He further added that it was the first time he had ever done that in a match and gotten an ace so he might try it again in the future if his opponent is standing so far behind the baseline.

"Yeah, well he started standing further back to return the first serve and, I mean, the courts are painfully slow here. I wasn't getting many free points on my first serve. I served three aces the whole match and one of them was the underarm service so I was thinking about using it again in the third set but I didn't, but yeah first time I've ever done it in a match, and got the ace so maybe I'll try it again in the future if guys are standing that far back," Murray was quoted as saying by Tennis TV.

Murray will now face third seed Alexander Zverev in the round of 32 of the ATP Masters 1000 tournament and the Brit will be hoping to carry on his two-match winning streak after he beat Frenchman Adrian Mannarino in the first round 6-3, 6-2. The German on the other hand had a tough time against Jenson Brooksby who won the second set to level the match but Zverev hit back and won the last set making the scoreline 6-4, 3-6, 6-1 and unlike Murray who was struggling to hit aces, Zverev hit 12 of them.

WE RECOMMEND
Andy Murray back in 'good books' after reunion with missing tennis shoes and wedding ring
Tsitsipas takes dig at Andy Murray: 'less bathroom breaks' make for 'less complaints'
Andy Murray defeats world no.26 Ugo Humbert in Moselle Open first round
No. 2 seed Ruud beats Murray in straight sets in San Diego
Rafael Nadal crashes out of Top 5 in ATP Rankings as Spaniard recovers from foot injury
Listen to the latest songs, only on JioSaavn.com