Carlos Alcaraz Scripts History At US Open 2021; Achieves THIS Major Milestone In 31 Years 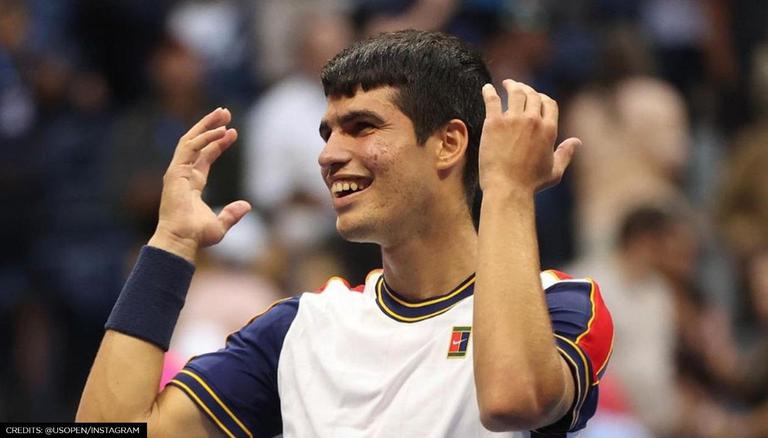 
Carlos Alcaraz has the world at his feet following an impressive run at the ongoing US Open 2021. The 18-year-old Spanish tennis star has now made his way to the quarterfinal of the event after beating qualifier Peter Gojowczyk of Germany 5-7, 6-1, 5-7, 6-2, 6-0. Apart from making a maiden appearance in the quarterfinal stage of the Grand Slam event, the youngster just a couple of days back become the youngest man to defeat a Top 3 player at the US Open.

Following the entry into the quarterfinal stage, Carlos Alcaraz became the youngest men’s quarter-finalist at any grand slam tournament since Michael Chang, who was also 18 when he reached the last eight at the 1990 French Open. Earlier in the tournament, Alcaraz had beaten the third seed Stefanos Tsitsipas and will now face 21-year-old Canadian Félix Auger-Aliassime, for a place in the semi-final. Auger-Aliassime beat American Frances Tiafoe in four sets. Alcaraz, whose current ATP live rankings is 55 globally, had had a great season, especially at Grand Slam tournaments. This year, he had reached the second round at the Australian Open and Wimbledon; and the third round of the French Open.

Inject this match straight into our veins. pic.twitter.com/ismQvOwNxQ

Carlos Alcaraz served for the opening set at 5-4 only to be broken by Peter Gojowczyk; the Spaniard lost the first set but bounced back to win the second set. Gojowczyk was not about to go quietly as he put a spirited fightback. While the german failed to serve it out the third set on his first chance, he made good on his next opportunity to win the third set.

Both players had treatment on their left legs deep in the fourth set, and after the treatment, Alcaraz held onto the 4-1 lead. The youngster went onto claim the fourth set 6-2. While Gojowczyk looked to be struggling the most among the two during the match, the fifth set saw Alcaraz completely dominating his opponent and not giving away easy points. In the end, he managed not only to close the set but also the match.