Clips released by the Chinese stooge have sparked further suspicion over why state media accounts were attempting to establish Peng Shuai's whereabouts. 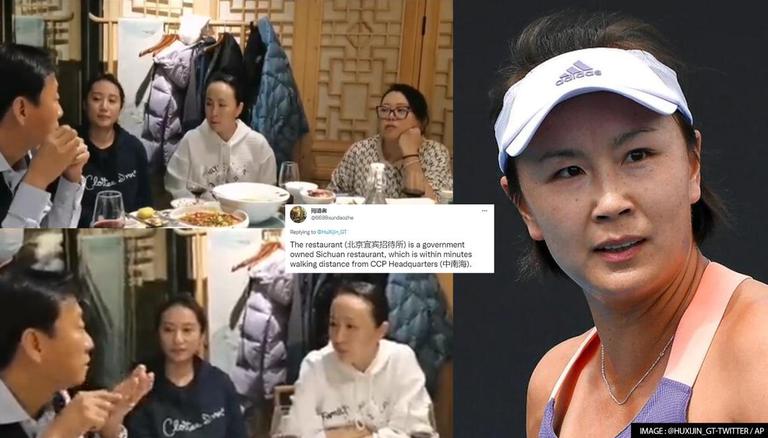 
As concerns surrounding Tennis sensation Peng Shuai's whereabouts continue to be expressed across the globe, Chinese state media has 'acquired' video clips of her, nearly three weeks after she disappeared. Hu Xijin, Editor-in-chief of state-run media Global Times has released two video clips, which show Peng Shuai having dinner with a group of people. The Chinese stooge has claimed that the accomplished tennis star's video was shot on Saturday (November 20) as per the Beijing time zone.

In the 1-minute video shared by Hu Xijin, Peng Shuai can be seen seated at a table with at least two others (including her coach) seemingly having dinner at a restaurant. However, the clips have sparked further suspicion over why state media accounts were attempting to establish her whereabouts.

After the Chinese stooge posted clips of the sports icon, netizens interposed that the need to prove that she was okay, was in fact, proving the opposite. Some even raised questions on the location of the restaurant where the clips were shot. Netizens alleged that the resultant was government-owned and just minutes away from the ruling party CPC's headquarters.

READ | Where is Peng Shuai? Why isn't the IOC speaking out?

Peng Shuai disappeared from public view in early November after she levelled sensational allegations of sexual assault against a retired top official in China's Communist Party. The 35-year-old tennis star has not been seen in public since November 2, shortly after she accused former Vice Premier Zhang Gaoli of coercing her into sexual activities at his home.

I acquired two video clips, which show Peng Shuai was having dinner with her coach and friends in a restaurant. The video content clearly shows they are shot on Saturday Beijing time. pic.twitter.com/HxuwB5TfBk

I confirmed through my own sources today that these photos are indeed Peng Shuai's current state. In the past few days, she stayed in her own home freely and she didn't want to be disturbed. She will show up in public and participate in some activities soon. https://t.co/VGLt6qoOOh

Why do these need to be released using state media accounts? Can she use her Weibo? Can she travel? Can she speak for herself?

She is a worldwide star. If you are needed to prove she is okay then that really proves the opposite, doesn’t it?

The restaurant (北京宜宾招待所) is a government owned Sichuan restaurant, which is within minutes walking distance from CCP Headquarters (中南海). pic.twitter.com/qtuyPGfpZJ

You know the more videos you release saying “all is ok” the less it looks like all is ok?

When I eat out with my friends, I always ask that one films while the other talks about today’s date. Thanks for clearing this up.

Old and previous videoes... When she is alright let her come to Twitter and on social media and let her speak on this issue

On November 2, Peng took to social media to reveal that she had been sexually assaulted and forced into a sexual relationship with Zhang Gaoli, 75, CPC's top leader and China’s vice premier (2013-2018), Human Rights Watch (HRW) said in its statement. She disappeared shortly after with her social media posts deleted promoting netizens to trend 'Where Is Peng Shuai' globally. From tennis champions like Naomi Osaka, Serena Williams, and Novak Djokovic to US President Joe Biden, several personalities and media organisations have called for ‘verifiable proof’ of Shuai’s whereabouts.

Meanwhile, China has continued to reiterate its stance of being 'unaware' of the controversy surrounding the country’s tennis professional. Chinese Foreign Ministry spokesperson Zhao Lijian on November 19 told the reporters that Peng’s matter was “not a diplomatic question and I’m not aware of the situation."