Daniil Medvedev's coach Gilles Cervara stormed out of the OWL Arena after the Russian tennis player yelled at him in middle of his Halle Open finals vs Hurkacz. 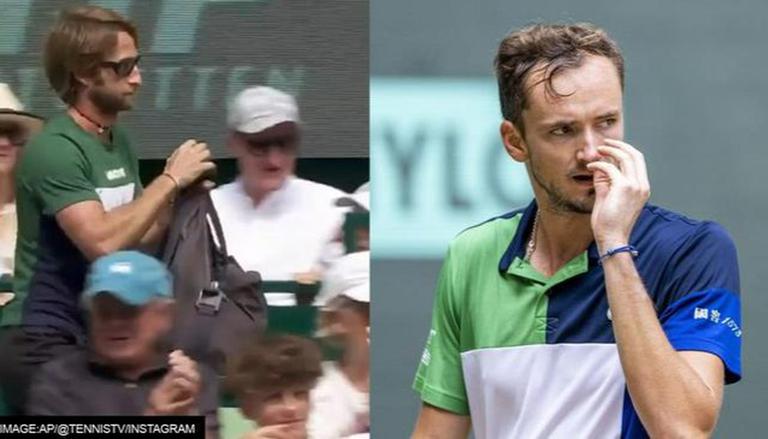 
Polish tennis player Hubert Hurkacz won the Halle Open 2022 after stunning World No. 1 ranked Daniil Medvedev in the summit clash on Sunday. The finals concluded on a frustrating note for the Russian as he suffered the defeat in two straight sets, with the scores of 1-6, 4-6. Medvedev was visibly frustrated and angry with his performance at the start of the game when he lashed out at his coach Gilles Cervara in front of the arena.

Gilles Cervara storms out of the court, mid way during the Halle Open finals

The incident transpired after Medvedev went down by a set and a break, break screaming at Cervara. The 41-year-old coach reacted by quickly picking his stuff and leaving the OWL arena, while Medvedev went on to lose the second set as well. In a video of the incident shared on social media by Tennis TV, the commentators can be seen decoding the incident and what led to the coach storming his way out of the court.

Watch the video of Daniil Medvedev shouting at his coach here:

“Gilles Cervara has seen enough. I'm not sure if there's been something said there or whether it was just the nature of that point but he is leaving the OWL arena. I can't quite believe what I've seen there," the commentator said. However, after the match, Medvedev calmed down and congratulated Hurkacz for winning the title, which comes under the ATP World Tour 500 category.

Hubert Hurkacz's second win of the year against Daniil Medvedev

As reported by Tennis World, Medvedev said, “Congrats Hubert, great match today, great week. Congrats to you and your team. You guys are super nice. Hopefully, a lot more matches to play on the biggest stage. Congrats for a great week and the title”. This was Hurkacz’s second victory of the year against Medvedev, after winning in the quarter-final of the Miami Open 2022.

Hurkacz now leads the head-to-head battle between both players by 3-2. The big-serving player finished the match in just 63 minutes and earned his first grass-court title. He was a semi-finalist at the Wimbledon Championships 2021, and was at prime form during the Halle Open 2022 in Germany. He earned a dominant win over in-form Nick Kyrgios in the semi-finals and made his way into the finals.