Roger Federer To Make An Appearance At Laver Cup In 2023? Swiss Maestro Clarifies

After announcing his retirement, Roger Federer played the final match of his career in Laver Cup teaming up with Rafael Nadal in the doubles. 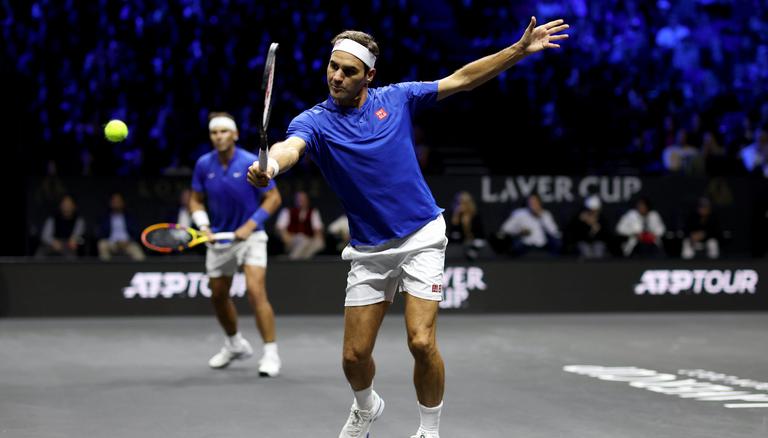 
Team Europe's Roger Federer was deprived of a proper farewell after losing the Laver Cup trophy to Team World on Saturday. Felix Auger-Aliassime defeated Team Europe's Novak Djokovic, while Frances Tiafoe overcame the challenge from Stefanos Tsitsipas to help Team World claim their maiden Laver Cup title. The next Laver Cup edition is scheduled to take place in Vancouver and Federer provided an update on his availability for the edition.

Roger Federer played the final match of his career in Laver Cup teaming up with Rafael Nadal in the doubles. Despite losing the last match, Federer chose to stay back in London and support his teammates.

Federer, who is one of the co-founders of this Laver Cup event, delivered one final speech in which he revealed his availability for the 2023 edition. The 20-time Grand Slam champion in his speech said, "I had no speech ready, I can say congratulations obviously to Team World. I was very confident going into today but well done Johnny Mac and the rest of the team for playing so well today, you deserve it. Have a nice celebration today like I told you."

READ | 'An important part of me is leaving too': Rafael Nadal pays exemplary tribute to Federer

He further went on to say, "It’s been great, been a little bit emotional at times. I recovered, the team has recovered. I hope I didn’t make the team lose but I had a wonderful time and I can’t thank you enough for that. I'd like to thank Bjorn, our captain. You're the king, you know it, I love you." The 41-year-old in the final moments of his speech confirmed that he will be participating in the Vancouver edition of the Laver Cup. He said, "Looking forward to next year, I’ll be there too and support both teams from a different position."

READ | 'Would do it all again': Roger Federer reflects on career in last post-match interview

What's next for Roger Federer after retirement?

Roger Federer finished his professional tennis career with eight men's singles Wimbledon championships in addition to six Australian Open, five US Open, and one French Open titles. While announcing his retirement, the 41-year-old labelled his decision as a 'bittersweet' experience. He went on to write that he considers himself to be one of the most fortunate people on the earth who was given a special talent to play tennis.

In his retirement speech he further added, "When my love of tennis started, I was a ball kid in my hometown of Basel. I used to watch the players with a sense of wonder. They were like giants to me and I began to dream. My dreams led me to work harder and I started to believe in myself. Some success brought me confidence and I was on my way to the most amazing journey that has led to this day. So, I want to thank you all from the bottom of my heart to everyone around the world who has helped make the dreams of a young Swiss ball kid come true. Finally, to the game of tennis: I love you and will never leave."

READ | Tennis' 'Big-3' Federer, Nadal, Djokovic set new bar for next generations
READ | Roger Federer returns to tennis as 'coach' for Matteo Berrettini a day after after retirement
SUBSCRIBE TO US