Defending Champion Naomi Osaka won 6-4,6-1 over Marie Bouzova of the Czech Republic in the first-round match of the US Open 2021 on Monday 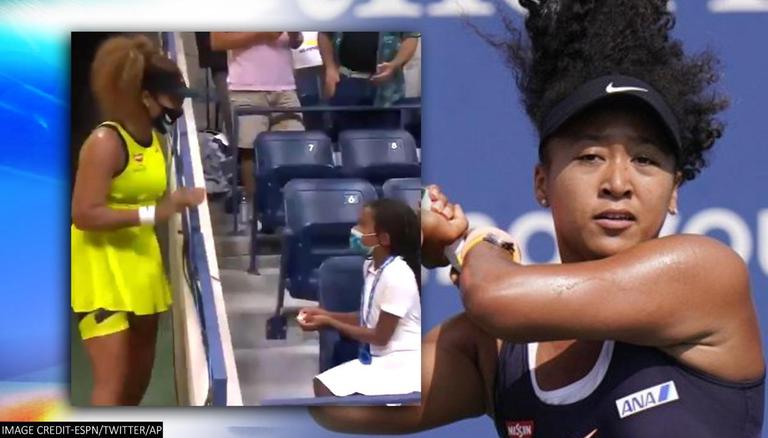 
Reigning Champion of the US Open, Naomi Osaka was seen sharing an Olympic pin with a young fan after winning the first-round match in the US Open 2021.

Making her return to the Grand Slam action after a break, Osaka defeated the Czech Republic’s Marie Bouzkova. Osaka was last seen at a major tournament on 30 May at the French Open. In a video posted by the US Open on their official Twitter handle, Osaka was captured sharing a pin with a young fan after winning the match.

That was lit.@naomiosaka opens the first night session of 2021 with a dominating performance. #USOpen pic.twitter.com/G4rZNH9zGD

During the post-match show, when asked her running over to the fan to hand her something, Osaka said that she saw the small girl cheering for her during the match. She added that in the Tokyo Olympics 2020, they received little pins that were supposed to be passed around to other athletes. However, Osaka exited the tournament after the Round of 16, so she had a couple of pins leftover in her bag. After the match, she handed over an Olympic pin to her cute supporter as a nice gesture to make the fan's day memorable.

"I just heard her when I was playing my match and she was so cute."@naomiosaka shared a moment with a young fan and gave her an Olympic pin after the match ❤️ 🥺 pic.twitter.com/s9P9qs2dHV

In the first-round match of the US Open 2021, the World no. 3 Osaka overcame a slow start to improve over course of her 6-4,6-1 win. She fired 21 winners but committed 13 unforced errors in the first set. Despite Bouzkova hanging tight throughout the opening set, Osaka broke Bouzkova’s serve 5-4 to win the opener. She never looked back after the first set as she went on to win five games of the second set and became victorious.

Earlier in May this year, Osaka withdrew from the French Open after refusing to speak to the media during the event. Following this, she was fined $15,000 for skipping media duties after her opening match. Citing mental health as the reason, Osaka also withdrew from the 2021 Wimbledon Championships. In the Tokyo Olympics 2020, Osaka returned to the court and won the opening two matches of the global event. She lost to Czech Republic’s Marketa Vondrousova in the last 16, exiting from the Olympic Games. She returned to the Grand Slam on Monday, with her US Open 2021 first-round match against Marie Bouzkova. She will next face Serbia’s Olga Danilovic.

The 👑 and her court.

Defending champion @naomiosaka was firing on all cylinders in a Round 1 win. #USOpen pic.twitter.com/xNAyRFqECt

WE RECOMMEND
US OPEN 2021: Djokovic, Osaka demand much of the attention
US Open 2021: Sofia Kenin tests positive for COVID-19, says 'disappointed' to miss tour
Andy Murray vs Stefanos Tsitsipas LIVE Streaming: How to watch US Open 2021 Live In India?
'Your life is your own': Naomi Osaka pens powerful message ahead of US Open 2021
US Open 2021: Complete schedule, preview, how to watch and Live stream details