US President Joe Biden has expressed "deep concerns" about Peng Shuai, who went missing after accusing a former PRC politician of sexual assault. 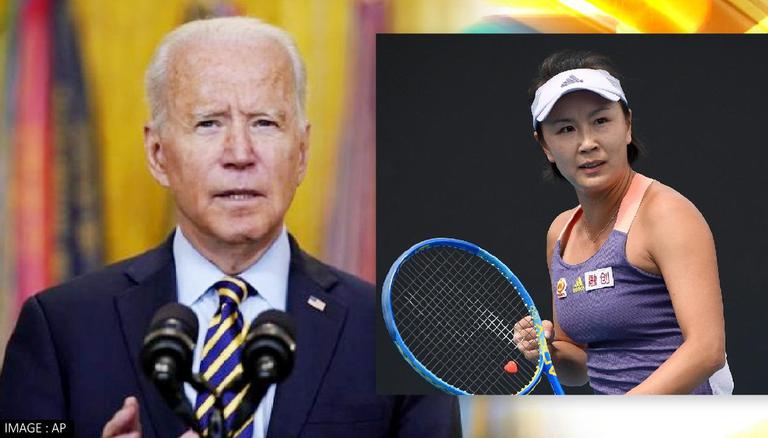 
US President Joe Biden has expressed "deep concerns" about Chinese tennis player Peng Shuai, who went missing after levelling serious allegations of sexual assault against former vice-premier of China Zhang Gaoli. Biden's press secretary Jen Psaki, while speaking to reporters on Friday, November 19, said the United States will continue to stand for freedom of speech as she called on China to provide "verifiable proof" of Peng Shuai's whereabouts. The statement comes after Chinese state media on Friday released photographs of Shuai to prove that the tennis player is "free" and is staying at her home in China.

Several analysts questioned the legitimacy of Shuai's photographs when they were released by a couple of Chinese state media journalists. The photos of Shuai were allegedly taken from her WeChat page, according to the journalists who shared them. Shuai will "soon" make a public appearance, claimed the Chinese journalists, to dispel rumours of her disappearance.

"We join in the calls for PRC authorities to provide independent and verifiable proof of her whereabouts and that she is safe. First, any report of sexual assault should be investigated, and we support a woman’s ability to speak out and seek accountability, whether here or around the world. Second, we’ll continue to stand up for the freedom of speech.  And we know the PRC has zero-tolerance for criticism and a record of silencing those that speak out, and we continue to condemn those practices," Biden's press secretary Jen Psaki told reporters.

What happened to Peng Shuai?

Shuai had accused the former Chinese Vice Premier Zhang Gaoli of forcing her into having sex with him in what she described as a brutal sexual assault incident that occurred almost three years ago and left her emotionally and mentally wrecked. In a since-deleted social media letter that she posted on Chinese social media platform Weibo on Nov. 2, the Chinese athlete made #MeToo allegations on the 75-year-old ex-member of Chinese President Xi Jinping’s powerful Chinese Communist Party. The posts were removed from the platform immediately after Shuai shared them. She went missing after that.

Several famous tennis players from around the world, including Serena Williams, Naomi Osaka, and Novak Djokovic, have raised their voices in support of Shuai's prompt release since her disappearance.