Watch Ugo Humbert waiting to receive his tennis racquet on the court, having forgotten to carry it ahead of his 2nd round win at Wimbledon 2022 vs Casper Ruud. 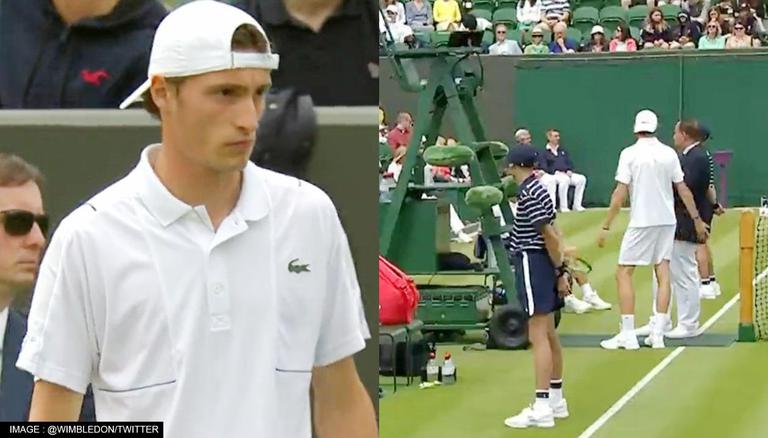 
French tennis superstar Ugo Humbert advanced into the third round of the ongoing Wimbledon Championships 2022, following his four-round win against French Open 2022 finalist Casper Ruud. The match started with Ruud winning the 1st set by 6-3, before Humbert made a 6-2 comeback in the 2nd set, before winning the next two sets by 7-5 and 6-4. While Humbert made headlines for his impressive run in the tournament so far, the Frenchman also became the talk of the town for something that happened before the game.

In a bizarre incident at the Wimbledon 2022, Humber turned up for his match against Ruud on Wednesday without carrying the racquet in his bad. The match which had been already delayed by almost one and a half hours due to rain, saw further delay before a volunteer at Court 2, came to Humbert’s rescue with three racquets. On being called by the umpires to start the knock-up, Humbert was seen looking inside his bad and realizing he has forgot the most important equipment with him.

He was then heard letting the umpire know about the same. "I don't have any rackets - sorry for that," Humbert said, as per the commentators of the match. Meanwhile, the crowd rose with cheers and applauses as the Frenchman received the new racquets. The confusion seemed to have an impact on Humbert’s game, as he lost the first set.

Watch the video of Ugo Humbert waiting for his racquet:

Reminder: Tennis is tricky without rackets 😅

Shedding his thoughts after the game, Humbert said, “I love to play on grass, I've played a lot of good matches. I've had some big battles. It was a great match and a great atmosphere." The video footage of the 23-year-old waiting for his racquets and speaking to the umpires was shared on social media by Wimbledon’s official Twitter handle, which quickly went viral on social media.

READ | How could Novak Djokovic drop to lowly 7th in ATP rankings even if he wins Wimbledon 2022?

“Reminder: Tennis is tricky without rackets,” Wimbledon captioned the video. At the same time, sharing the video on Instagram, the tournament said, “Of all the things to leave in your locker”. Humbert will now face David Goffin in the third round of the tournament on Friday, eyeing qualification for the fourth round.

How did fans react to the incident?

In the meantime, Humbert received many interesting responses from fans over the bizarre incident on Twitter. “What?! Has that happened before; a player entered any tennis court with zero (0) rackets (I've seen few, sent for extra or restring, not 0!)?,” a fan enquired. At the same time, another fan said, “The smile on his face when the rackets arrived”.

READ | Wimbledon 2022: Why was Serena Williams playing with black plasters on her face?

What an extraordinary feat!! Hence proven.. amnesia comes in many forms.. age no bar😄😄

"TALK" with your Racket "PLAY" with YOUR HEART🤭🤣🤣

What?! Has that happened before; a player entered any tennis court with zero (0) rackets (I've seen few, sent for extra or restring, not 0!)? In the words of @bgtennisnation, you get a #redcard! 😂😂 #Wimbledon

The smile on his face when the rackets arrived 😊