'You're The Reason I Began Watching Tennis': Reactions Pour In As Roger Federer Retires 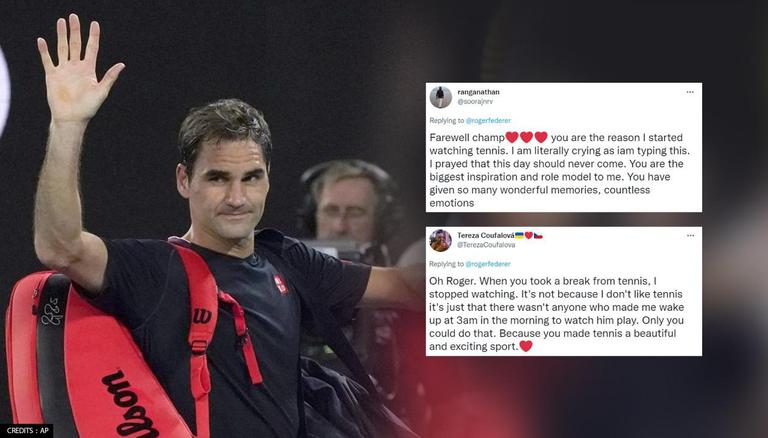 
20-time Grand Slam champion Roger Federer announced his decision to retire from professional tennis on September 15, making several of his fans emotional who hailed him as the greatest ever player to grace the sport. The Swiss Maestro's decision to retire certainly means the end of an era that began in 2003, the year the 41-year-old broke onto the scene by winning his first Grand Slam title at Wimbledon.

Since then, Federer has not looked back as he not only went on to become the first man to win 20 Grand Slams but also scripted several records along the way, many of them that stand until today.

Fans get emotional on hearing Federer's decision to retire

Farewell champ❤️❤️❤️ you are the reason I started watching tennis. I am literally crying as iam typing this. I prayed that this day should never come. You are the biggest inspiration and role model to me. You have given so many wonderful memories, countless emotions

Oh Roger. When you took a break from tennis, I stopped watching. It's not because I don't like tennis it's just that there wasn't anyone who made me wake up at 3am in the morning to watch him play. Only you could do that. Because you made tennis a beautiful and exciting sport.❤️

With my sister we watched you play in Colombia, We woke up early in the morning to cheer you in all your GS finals,we smile with your wins and cried with your losses along as you, you made my life happier and I'm greatful for that. Thanks for all master, it's been quite a ride

Take care Roger! I can’t think of anyone who has had so much of an influence as you on me. I have been a fan of yours for more than 20 years now. Your calmness on court helped has inspired me to stay calm in difficult times 😊

Not only one of the GOATs of tennis, but one of the best athletes of all time in ANY sport. That glorious one-handed backhand will live on forever.

Roger Federer released both a statement and a video via his official social media handles to announce his retirement from professional tennis. The statement read,

"To my tennis family and beyond, of all the gifts that tennis has given me over the years, the greatest, without a doubt, has been the people I have met along the way; my friends, my competitors and most of all the fans who give the sport its life. Today, I want to share some news with all of you.

As many of you know, the past three years have presented me with challenges in the form of injuries and surgeries. I have worked hard to return to full competitive form. But I also know my body's capacities and limits, and its message to me lately has been clear. I am 41 years old. I have played more than 1500 matches over 24 years. Tennis has treated me more generously than I ever would have dreamt and now I must recognise when it is time to end my competitive career."

With 20 Grand Slams (six Australian Opens, one French Open, eight Wimbledon and five US Open titles) and several other records to his name, Federer is undoubtedly one of the greatest stars to grace the sport of tennis. The 41-year-old last played a competitive match at Wimbledon in 2021 and since then has been sidelined with a knee injury.

READ | Retirement U-turn? Serena Williams says she is 'still capable' days ahead of AUS Open
READ | 'Had the luck or...': Carlos Alcaraz makes Novak Djokovic admission after winning US Open
READ | Roger Federer kicks off training ahead of long-awaited comeback at Laver Cup 2022: Watch
SUBSCRIBE TO US