On Saturday, Brock Lesnar made a shocking return after the WWE Summerslam main event between Roman Reigns and John Cena for the Universal Championship. 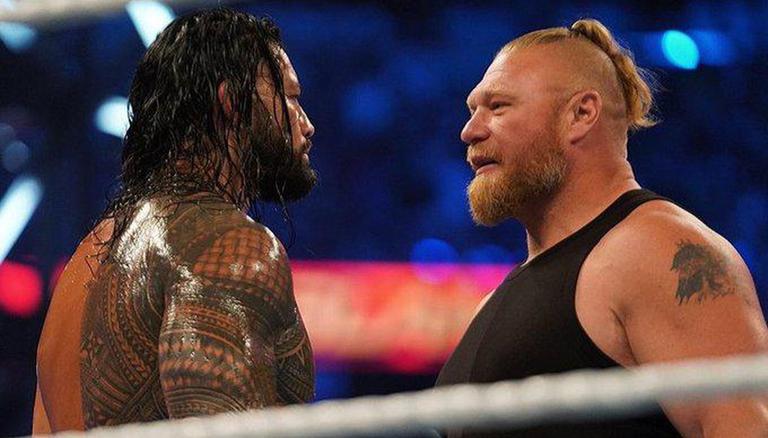 
The WWE Universe was left shell-shocked when Brock Lesnar's music hit and the 'Beast Incarnate' Brock Lesnar made his way to the ring after the WWE Universal Championship match between John Cena and Roman Reigns, which was the main event of this year's Summerslam at the Allegiant Stadium in Las Vegas. In videos that are now emerging, Brock Lesnar can be seen beating up John Cena after his bout against Reigns had finished and after the SummerSlam went off the air.

The pro-wrestling fans witnessed two of the biggest superstars in the history of the sport making their respective comebacks to the ring this week and that too in a span of 24 hours. While it was CM Punk who made his comeback to pro-wrestling for the first time since January 2014 as he made his AEW debut at the AEW's Rampage: First Dance at the United Center in Chicago on Friday, it was Brock Lesnar who had the Las Vegas fans on their feet when he made a shocking return at WWE Summerslam on Saturday.

While some fans were happy to see Lesnar back others felt bad for John Cena and the beating he took. Here are some reactions to it:

One fan was quick to point out that Cena was lucky it was only two Suplexes as opposed the multiple he took the last time these two faced each other back in 2014.

Another fan used the GTA San Andreas meme to insinuate that Cena was used to taking beatings.

Other users were celebrating the seven-year anniversary since Lesnar and Cena had last faced each other.

All eyes were on John Cena as he not only looked to end Reigns' title reign but also was eager to win his 17th major title. The current 'Face' of the company and the wrestler-turned-actor were engaged in a pulsating contest to determine the winner of the WWE Universal Championship. Nonetheless, it was Roman Reigns who came out on top on the given day.

READ | WWE: Roman Reigns lashes out at CM Punk for not being 'as good' as John Cena or The Rock

Cena had applied his submission maneuver STF on Reigns but the latter was able to get to the ropes to break the hold. In fact, John Cena had executed his finisher the 'Attitude Adjustment' on Roman Reigns not once but thrice. The first one was executed inside the ring which turned out to be a near fall. The second 'AA' was executed outside the ring i.e. putting the reigning champion through the announce table. The 16-time world champion then went on to hit Universal title-holder with a third Attitude Adjustment from the second rope but Reigns kicked out.

The two men gave it all they had and in the end, the 'Big Dog' hit Cena with a couple of Superman punches and a spear to pick up a victory with a three-count.