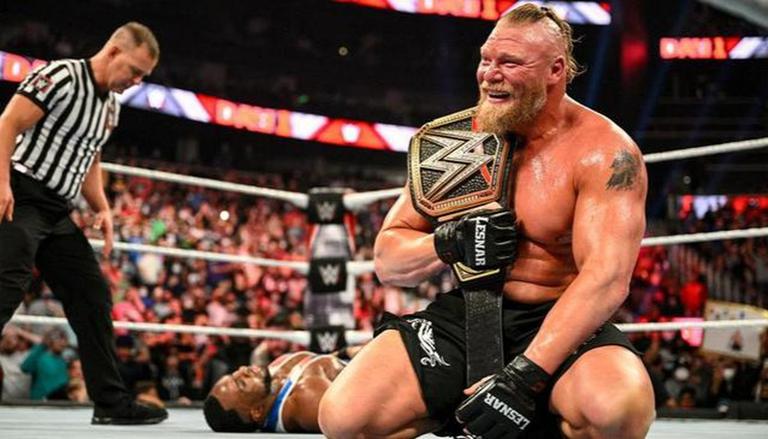 
Brock Lesnar became the talk of the town on January 2, after picking up the WWE Championship title for the sixth time in his career during the WWE Day 1 pay-per-view on January 1. Lesnar was earlier slated to challenge Roman Reigns’ WWE Universal Championship title, however, he ended up challenging Big E for the heavyweight title in a fatal five-way match alongside, Seth Rollins, Kevin Owens, and Bobby Lashley. The last-minute inclusion of Lesnar in the WWE championship match saw Big E ending his reign as the WWE champion, which started back in September after he defeated Bobby Lashley on Monday Night Raw.

Meanwhile, after winning his sixth WWE Championship title, Lesnar was seen posing with the champion’s belt alongside some famous sports personalities. Hockey Analyst and three-time Stanley Cup Champion Rick Tocchet took to his official Twitter handle and shared a picture of him alongside Lesnar and others posing with The Beast’s championship belt. Sharing the picture, Tocchet mentioned that he found a nice surprise in a hotel bar.

READ | WWE NXT 2.0 Live Stream: Where to watch the episode and what to expect? Details here

How did fans react?

Meanwhile, wrestling fans were enthralled to watch Lesnar snatching the title from Big E as they also hailed Tocchet for being able to pose with Lesnar. A fan mentioned that it is rare for Lesnar to pose for a picture as he is not known for interacting with fans. At the same time, fans also wondered if Lesnar has lightened up as he is growing older now.

Wow you actually got Lesner to pose for a pic? That’s rare as he’s not known for his fan interaction lol! He admits he doesn’t like people much lol. I guess you can’t say no to “The Great One” though lol

Guess he’s lightening up as he gets older lol! Don’t get me wrong, I love Lesner, he’s just not known for his love of the fans lol

Apart from the fatal five-way match for the WWE title, the WWE Day 1 PPV featured many other high-intensity clashes. Among the many, the most notable ones were the RAW Women’s championship title clash, RAW Tag Team Championship title and the SmackDown Tag Team Championship title. Raw Women’s Champion Becky Lynch successfully defended her title by defeating Liv Morgan, while Randy Orton and Riddle (RK Bro) defeated The Street Profits to defend their title. At the same time, The Usos successfully defended their title against The New Day (Kofi Kingston and King Woods).

WE RECOMMEND
2022 WWE Day 1: Can Brock Lesnar stop Roman Reigns from breaking his record?
Why was former NXT star Toni Storm released by WWE months after joining SmackDown?
Paul Heyman hints at quitting WWE; why did his relationship with Roman Reigns turn sour?
Seth Rollins tests positive for COVID-19, will he miss WWE Pay-per-view Day 1?
WWE Hall of Famer Jim Ross announces he is 'cancer free' two months after diagnosis
Listen to the latest songs, only on JioSaavn.com