Satnam Singh, who became the first Indian basketball player to be picked in the NBA draft, announced his signing with AEW on Friday morning. 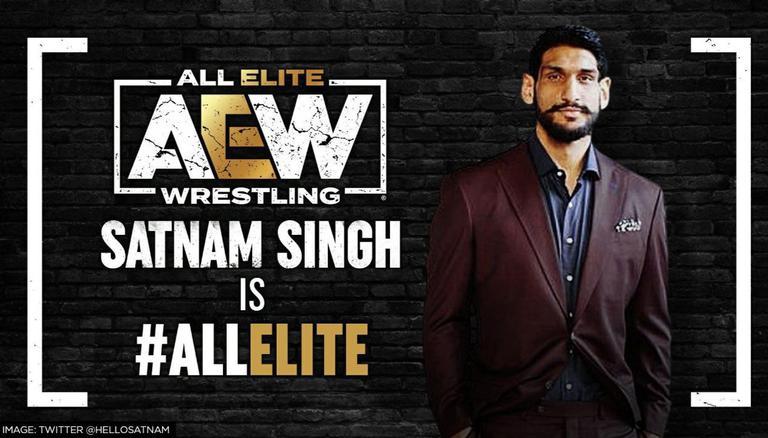 
The Great Khali aka Dalip Singh Rana had put India's name on the pro-wrestling mat when he signed for World Wrestling Entertainment where he made for himself. The 7 foot 1 wrestler was an intimidating figure in the locker room and also a unique threat to every member of the WWE roster. Another Indian is all set to make his name in the Pro-Wrestling world after recently signing for the All Elite Wrestling (AEW) brand. The man we are talking about is none other than Satnam Singh.

In the tweet posted by the hoopster himself, he thanked AEW for giving him the opportunity to represent the brand. According to AEW's official release, Satnam Singh AEW arrival comes after NBA Hall of Famer Shaquille O'Neal, who participated alongside Jade Cargill in a mixed tag team match against Cody Rhodes and Red Velvet on 'AEW: Dynamite' in March earlier in 2021. Talking about Satnam Singh height the Indian has 7'2" in height and this is not the first time that he will be joining a wrestling company. According to the NBA India website in 2017, Singh had visited and trained at the WWE Performance Centre but eventually decided against joining the company.

In his statement, CEO, GM and Head of Creative of AEW Tony Khan has praised the Indian for his athleticism and charisma and his plan regarding promoting homegrown talents. He said, “While we’ve recently secured some of the hottest free agents on the planet, I’m also deeply committed to cultivating our own homegrown stars and the next generation of extraordinary professional wrestlers.” Khan added, “In addition to Satnam’s commanding 7’3” stature, I was impressed with his high level of athleticism and charisma. He’s an exciting addition to our roster, and I’m looking forward to our fans getting to know Satnam’s personality and watching his development.”

READ | CM Punk's return to pro wrestling could have been with WWE instead of AEW: See why

According to wrestletalk.com, which has quoted the latest Wrestling Observer Newsletter, the reason behind Satnam Singh AEW signing is the company's recently-signed TV deal with Eurosport in India. According to Dave Meltzer, "AEW has signed Satnam Singh, a 7-foot-2 center from India who was drafted by the Dallas Mavericks as the 52nd player picked in 2015. He played NBA Summer League and G League at 290 pounds for a few years, and played in some other minor leagues. He was one of the few players in the last 20 years drafted without playing any college basketball. This has to do with AEW getting television on Eurosport in India. He will start training at the Nightmare Factory in Atlanta under QT Marshall and Cody Rhodes."