Watch Roman Reigns teasing his retirement from WWE ahead of the WWE WrestleMania Backlash 2022 premium live event at Rhode Island. 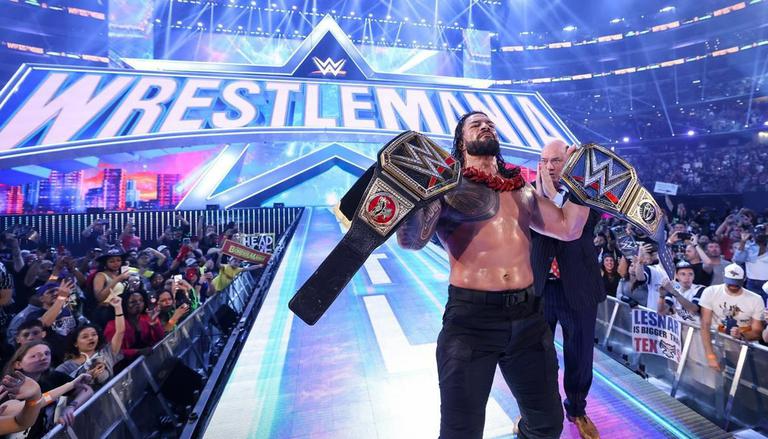 
WWE’s undisputed universal champion Roman Reigns became the most talked about point in the WWE universe by hinting at his retirement from WWE at a recent live event.

After defeating Drew McIntyre in the universal championship match at WWE Saturday Night’s Main Event, Reigns spoke to the audience and said that his current reign in WWE might come to an end soon. Reigns is currently the WWE undisputed universal champion as he picked up the WWE title at WrestleMania 38 in the Title vs Title Winner takes all match.

As per the video going viral on social, Reigns said, “I’ve been here a couple of times in the past 10 years. I’m starting to work into a new phase in my career, and I honestly don’t know if I’ll be back here again. If that’s the case, I just wanna say thank you for all these years of support.”

Looking at the response from the wrestling world, it seems like Reigns is transitioning to the Hollywood, following the footsteps of Dwayne ‘The Rock’ Johnson and John Cena.

Reigns previously signed a multi-year deal with WWE back in 2019, as per reports it runs till 2023. Having said that, Reigns is all set to appear at WWE WrestleMania Backlash 2022 pay-per-view event.

WrestleMania Backlash 2022 is set to be held at the Dunkin Donuts Center in Providence, Rhode Island. Reigns will be teaming up with the SmackDown tag team champions The Usos in the six-man tag team match against the Raw tag team champions RK-Bro (Randy Orton and Riddle) and Drew McIntyre.

A look at Roman Reigns' career-

Roman Reigns made his WWE debut back in 2012 and has become the face of the promotion after spending 10 celebratory years. During this period, he teamed up with Seth Rollins and Dean Ambrose to form the tag team known as ‘The Shield’ which is regarded as one of the most iconic stables of the promotion. He won the WWE Tag Team Championship for the first time in 2013, before becoming the WWE world heavyweight champion for the first time ever in 2015.

READ | WWE WrestleMania Backlash 2022 Live Streaming: How to watch WWE in India, US and UK?