WWE Crown Jewel: Paul Heyman has confirmed that he will be walking in and walking out with the champion as Roman Reigns takes on Brock Lesnar. 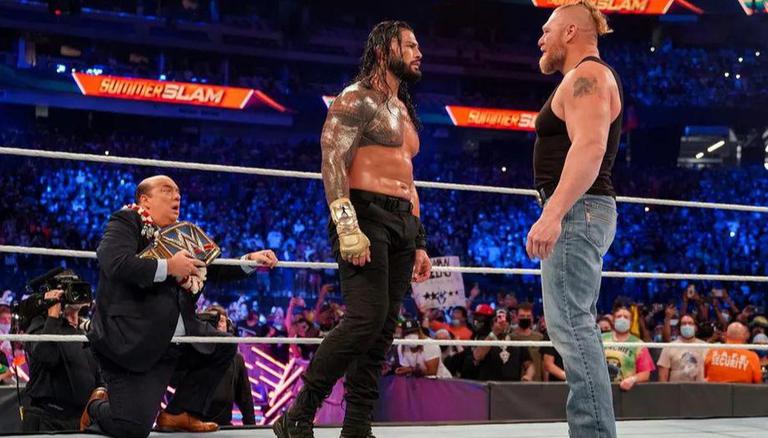 
With the WWE Crown Jewel just around the corner, the world gears up for an epic battle as Roman Reigns will take on Brock Lesnar for the WWE Universal Championship. The fight has been fueled by controversy since it was first announced, with Paul Heyman amid the centre of it all as he was the agent for Brock Lesnar and Roman Reigns. However, now he has confirmed that he will be walking in with the champion and walking out with the champion but will that be the same person, we shall wait and see.

Heyman took to Instagram and said: "Exclusive! Spoiler for Crown Jewel! Roman Reigns vs. Brock Lesnar... This Thursday - LIVE on Peacock and WWE Network. I hate to spoil the ending of what is the biggest box office match of 2021, but... Ladies and Gentlemen, my name is Paul Heyman, and I will be walking down the aisle at Crown Jewel with the reigning defending undisputed WWE Universal Heavyweight Champion... and I assure you, I will be leaving Crown Jewel with the WWE Universal Heavyweight Champion!"

The Brock Lesnar vs Roman Reigns match for the WWE Universal Championship is undoubtedly the headline match of WWE Crown Jewel 2021 because of its interesting storyline. The storyline features Paul Heyman potentially playing the role of a double agent, as fans remain unsure if he is aligned with Reigns or Brock Lesnar.

How to watch WWE Crown Jewel 2021 live in India?

Fans wondering how to watch WWE Crown Jewel 2021 live in India can tune into the Sony Sports network, which has the official broadcasting rights for the show. The event will be telecasted on Sony Ten 1 SD/HD in English and on Sony Ten 3 SD/HD in Hindi. As for the live streaming, fans can tune into the SonyLIV app. Meanwhile, live updates of all feuds can be tracked on the social media handles of WWE.