WWE SummerSlam Results: Roman Reigns retained the title thanks to help from The Usos while Logan hit The Miz with his own skull-crushing finale. 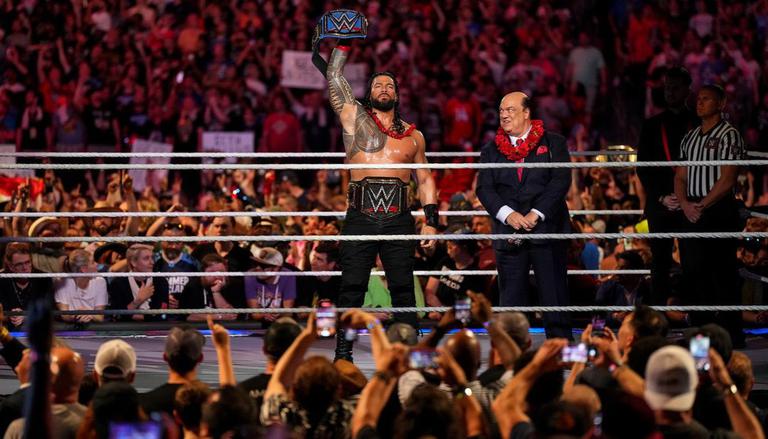 
Thousands of fans flocked to Nissan Stadium in Nashville, Tennessee to witness the biggest party of the stadium i.e Summerslam. The match that every wrestling fan was waiting to watch was between Roman Reigns and Brock Lesnar which was billed as the final chapter. Liv Morgan defended the SmackDown Women's Championship against Ronda Rousey, while Becky Lynch looked to take Raw women's title from Bianca Belair. Logan Paul faced The Miz. Let's take a look at WWE SummerSlam Results.

Becky Lynch used her technical ability inside the ring to get the upper hand on Bianca Belair. Both women wrestlers fought in and out of the ring and used steps, ring posts and barricades during the match. Belair was able to secure the win with a Spanish Fly followed by the KOD. Surprisingly, Lynch offered her hand as a show of respect and they hugged to a nice reaction from the crowd.

The Miz mentored Logan Paul during the Wrestlemania match against The Mysterious only to hit him with the skull-crushing final at the end. The Miz used his veteran experience to control Logan Paul, but he also got some hand from Ciampa who distracted the referee. AJ Styles came to Logan's aid by beating up Ciampa and sending him packing through the crowd. Paul then hit The Miz with a springboard forearm before he was able to win the match with his own Skull-Crushing Finale.

US Title: Bobby Lashley vs. Theory

The match started with Theory attacking United States Champion Bobby Lashley with his Money in the Bank briefcase. However, once the match started it was Lashley who dominated Theory. The 24-year-old tried to leave the match at one point, but Lashley wasn't letting him off that easily. He threw the challenger into the barricade a few times before getting him back to the ring. Lashley got the win with The Hurt Lock to retain his title.

After assaulting Rey Mysterio during his 20th WWE anniversary celebration Finn Balor and Damian Priest face Rey and Dominik Mysterio took in a No Disqualification match. Balor tried to bring a chair into the match, while Rhea Ripley provided a distraction from outside. As the match progressed Edge returned in the middle of the match and took out Balor and Priest, helping The Mysterios win.

READ | Brock Lesnar vs The Rock: Top 5 matches that made history on WWE SummerSlam

Undisputed Tag team Titles: The Usos vs. The Street Profits

After failing to win the title at MITB, The Street Profits had yet another shot at the Undisputed Tag team Titles with Jeff Jarrett as special guest referee. The Usos took control of the match but were also saving energy by doing some showboating to slow the pace of the match. However once Ford entered the ring the action became fast-paced. The Usos were able to take out Ford from the match by throwing him into the crowd, the champs then hit their finishing move to retain the title.

READ | Seth Rollins names this WWE superstar as 'Greatest Of All Time'; she's 'larger than life'

Liv Morgan cashed in her Money in the Bank to win the SmackDown Championship from Ronda Rousey. Morgan tried to dominate Rousey right after the bell, but the former champion hit a running knee and a quick throw which helped her gain control. Rousey tried to end the match early by applying the armbar, but Morgan managed to escape. The climax of the match saw Morgan end up pinning Rousey while tapping out at the same time; however, the referee only saw the pin, and Morgan was able to retain her title. Ronda lost her cool and attacked both her rival and the referee.

The Brock Lesnar vs Roman Reigns main event match started with Brock Lesnar going all out against Reings by both wrestlers using whatever they could find to inflict more damage. The big moment of the match came when Lesnar used the tractor to lift up one side of the ring to send Reigns tumbling out of it onto the floor. The Usos also got involved but The Beast took out both brothers before hitting Paul Heyman with an F-5 through the announce table. Theory tried to cash in the MITB bag only for Lesnar to take him out. Reigns and The Usos used everything they had to bury Lesnar under everything to pick up the win.