Apex Legends Could Have Surfaced Almost An Year Ago, Hilariously

It now seems like popular battle royale game Apex Legends surfaced a year ago, albeit unofficially, with gamers missing cues. Yes, this possibility could have taken place on Reddit in March 2018.

It now seems like popular battle royale game Apex Legends surfaced a year ago, albeit unofficially, with gamers missing cues. Yes, this possibility could have taken place on Reddit in March 2018.

Now, as per renowned game tipster going by the YouTube moniker Jackfrags (via a new YouTube video), cues to Apex legends could have surfaced through rumour mills on Redditt during March 2018. A user HitIconic could have probably leaked an Apex Legends map. The tipster has now accessed this map, gauging which, it is imminent that a lot of names on the map are the same as they are now. These include the likes of Cascades and Skull Town among other elements (of the map). Check out a screenshot of the leaked map, below (courtesy Jackfrags): 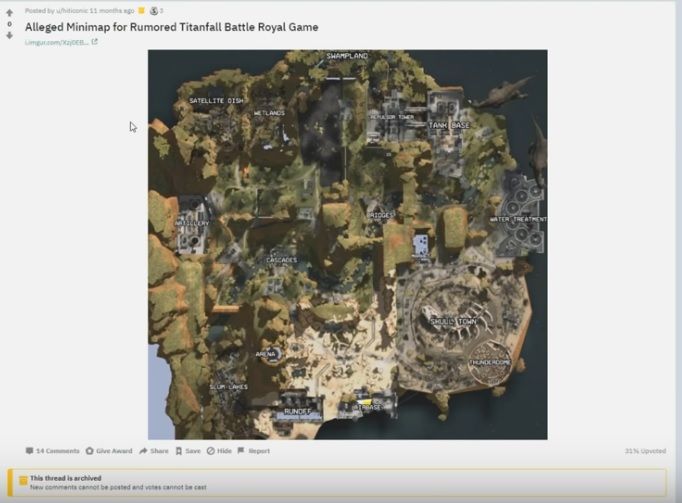 Also, comments from other Reddit users are whacky as some of these are reportedly not wanting battle royale to be added to the above-surfaced map. Other comments, from users, clearly indicate that the map has not been taken seriously.

With respect to battle royale, this exact aspect made headlines when Apex Legends joined the league. It has PlayerUnknown’s Battlegrounds (PUBG) and Fortnite to battle with now. Ironically, Apex Legends has been described by w wide community of players as an effective battle royale. So much for seeking no battle royale! (pun intended).

The above map could have been something like a concept at that point in time. With Apex Legends battle royale turning into reality, it looks like a vast majority of players today did not take the concept Apex map seriously in March 2018.

In related developments, the current version of Apex Legends could get interesting new content in the near future, as a commemoration of the game onboarding as many as 50 million players in a month since being launched. Apex Legend, as of now, is even rumoured to be released on the Android/iOS mobile platform across the world.

Also Read: PUBG Heaps Praises On It's Latest Competitor And New Battle Royale Game, Apex Legends: Could There Be Something In Store For Gamers