Once the Google Lens is integrated with Google Chrome for desktop, users will be able to perform image-based web searches much more easily. 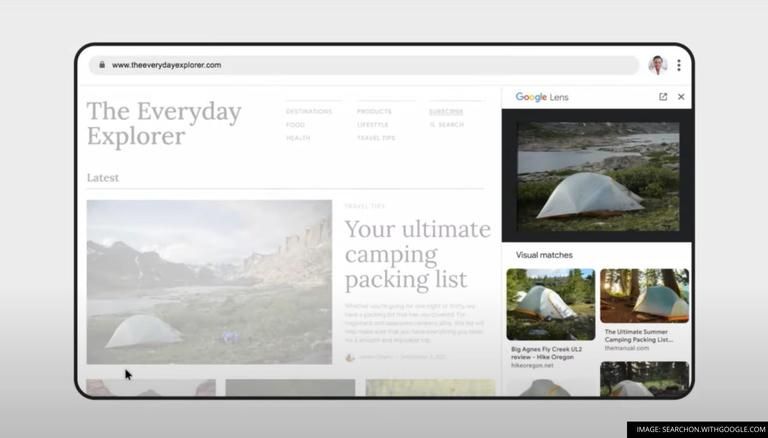 
To make its search functionality better, Google will be introducing Google Lens for Chrome browser on the desktop. The update will be rolled out to users across the globe within few months. Once the update is released, users will be able to select and search with images, video and text on a website to get additional information about the same. Once the Google Lens is integrated with Google Chrome for desktop, users will be able to perform image-based web searches much more easily than the Google Reverse Image Search allows.

Google Lens for the desktop will work with content within web pages and secure additional information about the same. For instance, if a website has a photo of the latest iPhone and the user wishes to know more about that image, Google lens might be able to fetch more details about the same from within that page, working as an in-built tool. The information will then guide the user about images on the internet that are similar and might include a shopping link as well.

In addition to Google Lens on desktop, Google Lens is also coming for Google App on iOS devices and will work similarly as it does on Google Search for Android devices. Google has announced that the search app integration for Google lens will initially be limited to users in the United StatesWhether the Google Lens on the desktop will be able to detect objects in pictures clicked by the desktop's external camera will remain an interesting aspect of the upcoming feature.

Google Lens is an application by Google that allows users to search the internet with images as input. It uses deep machine learning and the camera sensor on a smartphone to detect what is present in the frame and how it matches other items listed on the internet. Traditionally, web searches have worked with the help of text-based inputs that search Google's database and return the most appropriate results. With Google Lens, users can search via images and get more useful results. The Google Lens is a step towards the era of virtual searches, which will provide much more relevant information to the user.

WE RECOMMEND
Google Meet gets animated backgrounds for Android users: How to replace the background?
Google vs CCI: Competition Commission denies leaking any confidential information
Google celebrates its 23rd birthday with a doodle on homepage
'Google' the most searched item in Microsoft Bing: Alphabet Inc. lawyer
Genshin Impact ratings drop to 2.8 on Google Play Store: Why players are angry with miHoYo
Listen to the latest songs, only on JioSaavn.com