TikTok Could Get In Massive Trouble For Scams Promoting Adult Dating Websites, The Company Responds

Another controversy could be brewing around TikTok after a study finds ByteDance's viral video app is filled with scams and fake accounts promoting adult-dating, impersonation and ways to boost likes and followers. According to a report by a cybersecurity firm Tenable, TikTok scams could be on the rise that trick users into signing up for adult dating websites with the help of fake profiles on TikTok.

The study explains how these fake TikTok profiles use videos stolen from Instagram and Snapchat. These videos usually feature women dancing and posing in bikinis. It also found one fake profile featuring a stolen video of a swimwear model.

"These profiles appear under the “For You” page, which is a page curated by a TikTok algorithm based on views and likes, though the specifics of how the algorithm works is not known," said Satnam Narang, Senior Security Response Manager at Tenable.

Narang further added unlike scammers, genuine TikTok users typically use hashtags #foryoupage, #foryou and #fyp in an attempt to get featured on these pages. But TikTok scammers tweak the algorithm by driving more attention to stolen videos. One of the ways scammers promote these videos, they use specific captions to drive users' attention to separate Snapchat accounts.

Examples of such captions include:

"In some captions, certain words contain periods between the letters, e.g. “nude” is “n.u.d.e” and “kiss” is “k.i.ss” though it’s unclear if this is an active attempt to bypass keywords that TikTok might be searching for to remove these spam accounts," Narang added. 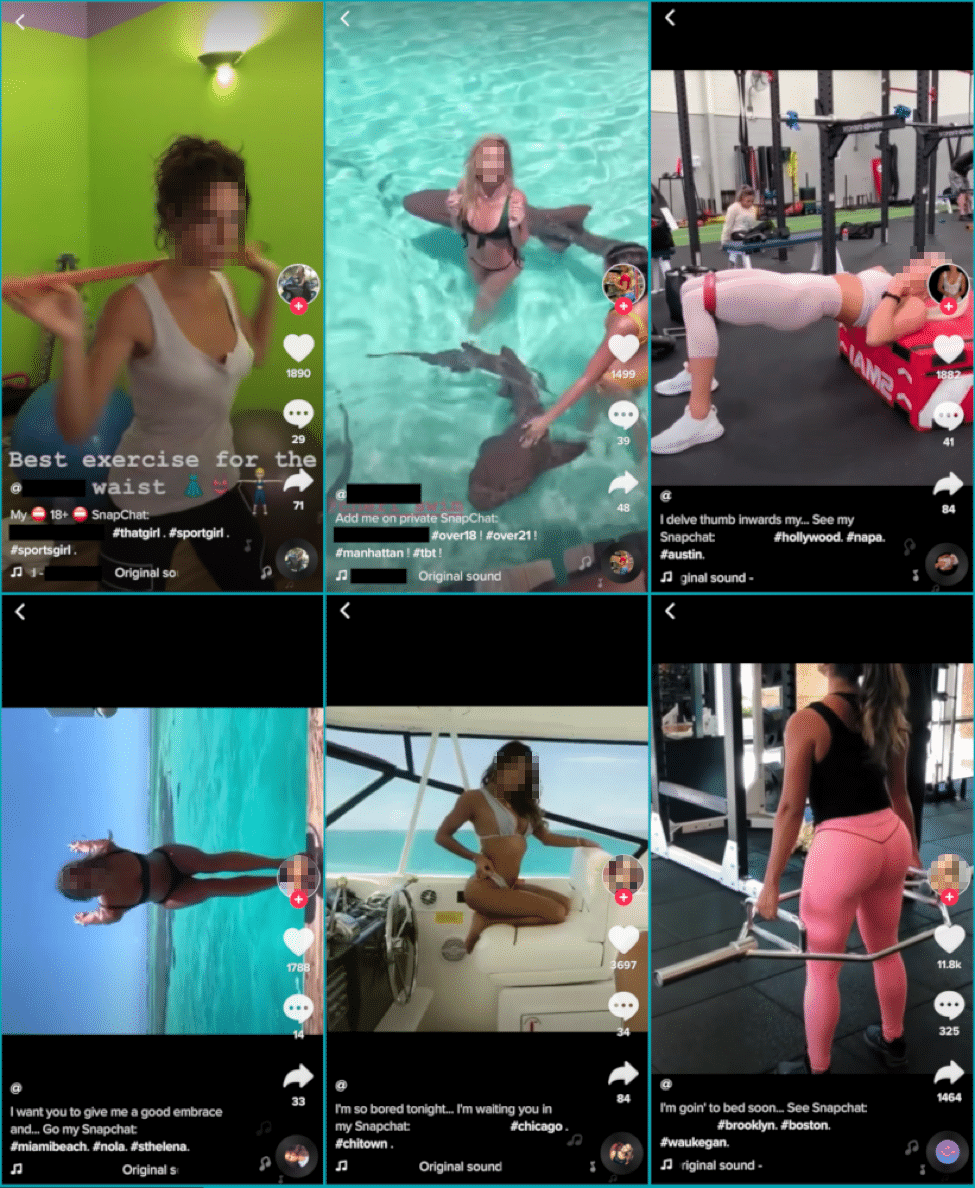 READ | TikTok beyond Ban and Blame: Experts have something to say about the State of ByteDance's viral video app in India

In addition to the captions, these accounts also contain a variety of hashtags adult-themed hashtags like #stripdance, #stripped, #18pluscontent and more. Scammers also use regional hashtags like #windycity, #massachusetts, #pittsburgh, #miamibeach to target users.

"My current assumption is that the scammers are either using sounds attached to the stolen videos, thus requiring them to create an original sound, or using original sounds to prevent the discovery of their videos via any algorithms TikTok has in place when listed under a different sound," he said.

In an email statement to Republic World, TikTok spokesperson clarified concerns raised by Tenable researcher. TikTok also said it removed all the accounts identified as spam before the publication of discovery.

"TikTok has strict policies safeguarding users against fake, fraudulent or misleading content. We flag and remove most spam accounts before they can reach users' feeds, and we continuously improve our protections, even as malicious actors work to evade our safeguards. TikTok had already removed all of the accounts identified as spam before this blog was published. As part of our regular process, we constantly review the tactics of malicious accounts to further strengthen our systems," TikTok spokesperson told Republic World.

TikTok also pointed us towards its community guidelines that warn against impersonation, spam, scams and misleading content.

"Our community values high-quality, engaging content. Content that is spammy, fake, fraudulent, or misleading is prohibited will be removed," TikTok's community guidelines read.

Earlier this year, Madras High Court had briefly banned TikTok over the concerns of "encouraging pornography" through its platform. The interim ban order was later lifted.