You Can Delete WhatsApp Message 1 Year After It Was Sent, Thanks To This New Feature

WhatsApp is rolling out a new feature that allows users to have their sent messages deleted automatically after a specific time frame. Here's how it works.

WhatsApp is rolling out a new feature that allows users to have their sent messages deleted automatically after a specific time frame. WhatsApp is rolling out one of the most-awaited self-destructive message features in its Android beta. However, WhatsApp is currently working on this feature before it can roll it out to the masses over a stable channel. Once this feature is implemented successfully, WhatsApp users will be able to automatically delete a message after a particular period of time set by the user, without any manual intervention.

As per Wabetainfo, WhatsApp is rolling out the feature in WhatsApp for Android beta version 2.19.348. Those who have enrolled for WhatsApp beta testing on the Google Play Store should be able to download and install the update. Alternatively, if you want, you can also manually update the app by downloading it from the APK available on a third-party platform. (However, always be cautious about downloading apps from unknown sources).

Sooner or later, the update is bound to roll out publicly to the masses in the weeks to come. Since the feature continues to remain under development, chances are most users may not be able to install this update. According to reports, WhatsApp has named this feature 'Delete Messages' ahead of the official release.

This update brings hidden tracks of the future feature "Disappearing Messages" as "Delete Messages", already compatibile with the Dark Theme.https://t.co/5EoMQkLQPP

NOTE: The Delete Messages feature will be available in future 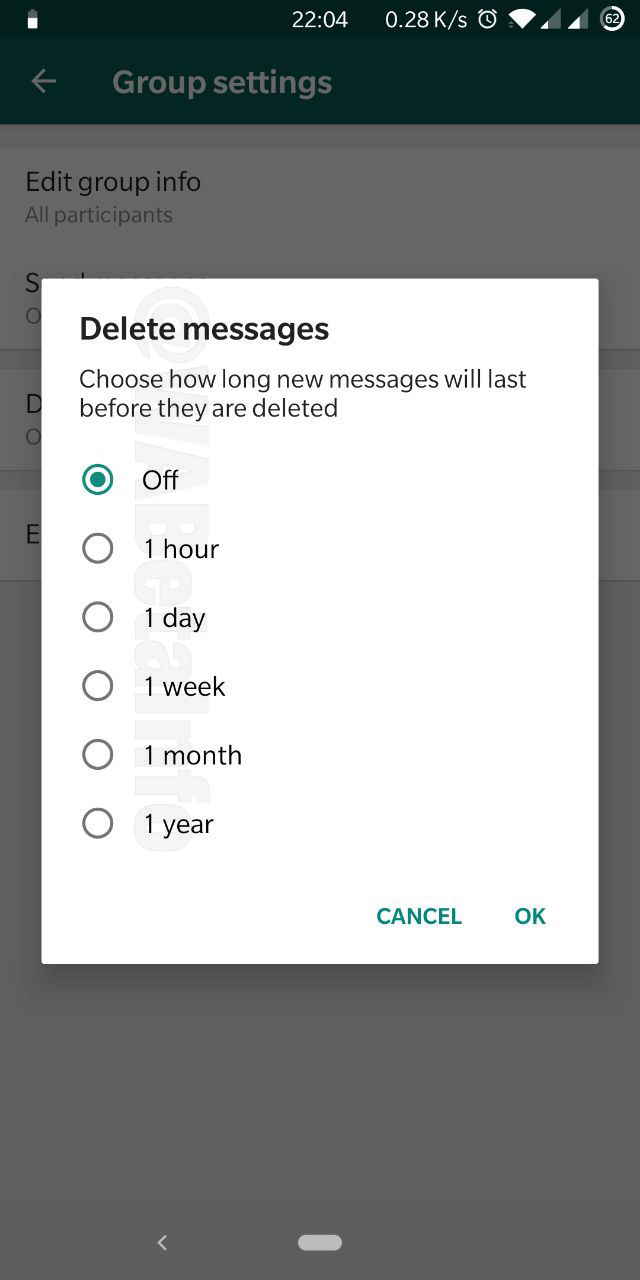 However, the feature is not available yet. It is learnt that initially, this feature will be limited to WhatsApp Groups.

-- Once 'Delete Messages' feature goes live for you, all you need to do is go to WhatsApp and tap on the group name.

-- Tap the group name and enter group settings. You must be a group admin to change 'Delete Messages' settings.

-- Choose how long new messages will last before they are deleted. You can choose from 1 hour, 1 day, 1 week, 1 month and 1 year.