The Moto Watch 100 appears to come with a circular dial, two physical buttons and a plastic back panel. Alongside, it also has silicon bands and large display. 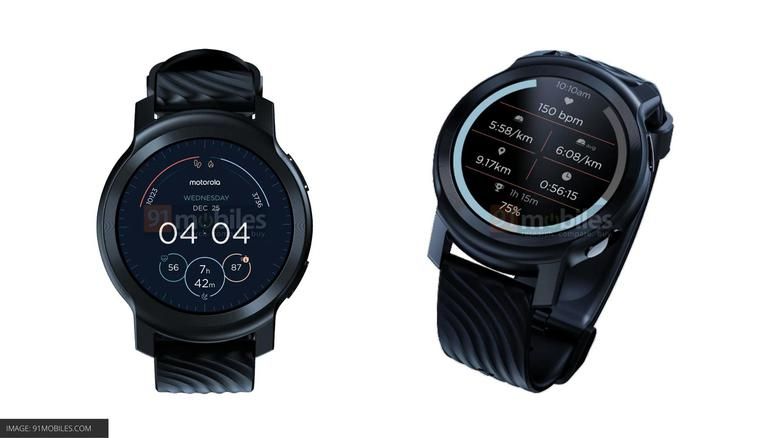 
Alleged renders of the Moto Watch 100 have surfaced online, along with specifications. As seen in the leaked renders, the smartwatch features a round dial along with a silicone strap that appears to have stripes on it. The wearable should have general health tracking features such as a heart rate monitor and step tracking. Alongside, it is also believed to have an in-built GPS tracking sensor.

According to the report, the Moto Watch 100 will feature a 1.3" LCD display with a resolution of 360 x 360 pixels. The device is said to weigh 29 grams and the dimensions of the watch are 42 x 46 x 11.9 mm. A standard strap of 20mm can be put up in the watch, as it is most likely to feature removable bands. Further, the watch might have a 355 mAh battery and connect to the companion smartphone via Bluetooth v5. The smartwatch is said to enter mass production in this month.

As far as the sensors on the Moto Watch 100 are concerned, it is said to come with a heart rate sensor, accelerometer, SpO2 sensor, gyroscope and an ambient light sensor for adjusting the brightness. The features that the watch might come up with these sensors are not known yet. It is important to keep in mind that Motorola has not announced the Moto Watch 100 yet.

As mentioned in the report by 91Mobiles, the smartwatch will come with a premium feel at a not-so premium price point. It will be interesting to see whether the company goes with Google's latest WearOS or not.