Samsung Galaxy Tab S7 FE is launched and it would be available to pre-order in the UK from June 2. Read on to know about the new Galaxy tab, features and price. 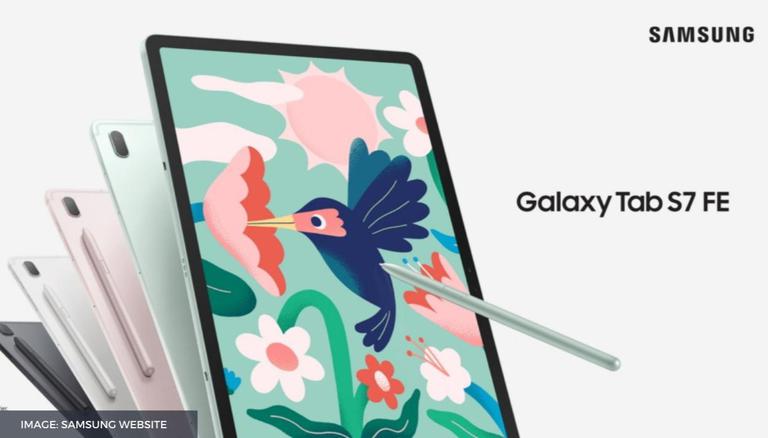 
While Samsung Galaxy Tab S7 FE was just a rumour a few days ago, Samsung has officially launched the new Galaxy tab. On May 27, Samsung revealed the specifications and other details through a blog post on their official website. It has been priced at GBP 589 (roughly Rs. 60,000), and would initially be available in the European market through Samsung's website from June 18. Keep reading to know about features, price and other details.

First up, the Samsung Galaxy Tab S7 FE comes with a 12.4" LCD display, with 2560x1660 pixels and a 16:10 aspect ratio. A user can use the multiple screen options to use different applications at the same time. At its core, the new galaxy tab is powered by a Qualcomm Snapdragon 750G, which is a mid-tier mobile chipset. It can handle daily usage and multitasking, along with light gaming with ease.

The Samsung Galaxy Tab S7 FE comes in two storage models. The base models are shipped with 4GB RAM and 64GB of storage, which is slightly on the lower side. There is another variant, which comes with a 6/128 configuration. Additionally, there is an option to extend the storage up to 1TB with the help of a microSD card. The new galaxy tab comes with all-day battery life.

On the back panel, the new galaxy tab comes with an 8MP AF lens, which can shoot videos in up to 4K 30 frames per second. The secondary camera in the front is a 5MP fixed focus and has the ability to track the user's face to keep it in the centre while on a video call. Both the cameras are capable of serving day-to-day video conferencing, clicking images or documents and casual photography.

Shipped with a 10,090 mAh battery, the Galaxy Tab S7 FE supports 45W fast charging, which can charge the device within 90 minutes. However, the charger which is shipped within the box supports only 15W charging. That aside, users also get an S-Pen in the box, which is Samsung's proprietary multimedia tool and enables a plethora of features on the new galaxy tab.

The tablet is equipped with all the necessary sensors such as Accelerometer, Compass, Gyro, Light, Hall sensor. Additionally, it comes equipped with GPS+GLONASS, Beidou, Galileo, in case someone needs GPS for travelling, tracking their morning walks or simply for location purposes. You also get a dual-speaker setup with the new Galaxy tab.

The new Samsung Galaxy Tab S7 FE is priced at GBP 589 for the base model, which comes with a 4/64GGB storage configuration. The upper variant is marked at GBP 629 and comes with a 6/128GB storage configuration. The models would be available in three colours: Mystic Green, Mystic Pink and Mystic Black, and they would be available to pre-order in the UK from June 2, 2021.