Fortnite Chapter 2 Season 7 New Characters: How To Get Guggimon Skin In Fortnite?

Guggimon, an Instagram sensation and Superplastic's mascot has come to Fortnite Chapter 2 Season 7. There are two Guggimon skins available in the game. 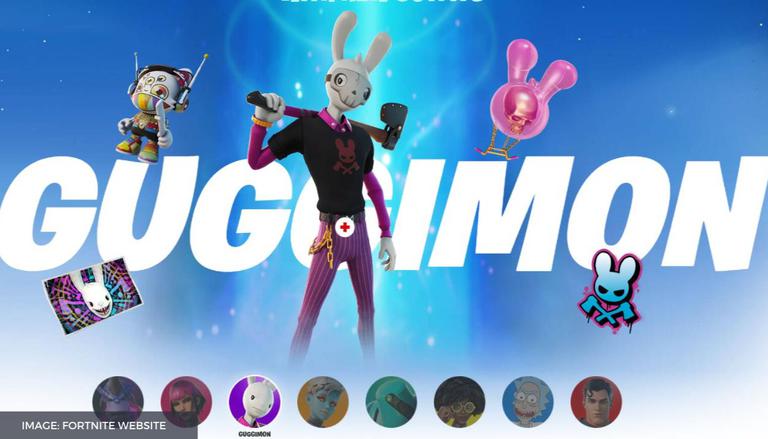 
Fortnite Chapter 2 Season 7 has begun. Fans are excited as an alien army has taken over the island, unlocking new weapons, characters, skins and completely new rewards. One of these new characters in the game is Guggimon, which looks like a humanoid bunny. Players can fight the character in the game or unlock the skin to fight as Guggimon. Read along to know more about how to get Guggimon skin in Fortnite.

How to Get Guggimon skin in Fortnite?

The new characters that are available to claim in the game are also found at different places on the island. Guggimon location is set at Lockie’s Lighthouse, which is situated above the Coral Castle on the map. A player can land on top of the lighthouse, to equip themselves with the required gear. Then come down through the staircase to find Guggimon strolling around. Once spotted, the NPC starts firing at the player with decent long-range weapons. Taking cover and shooting might be good gameplay to defeat the NPC and claim its weapons and other rewards.

Outside the game, Guggimon is a mascot for a brand called Superplastic, which creates apparel and designer toys. Guggimon Fortnite skins are the result of a collaboration between Epic Games and Superplastic, just like the other new characters of Superman and Rick Sanchez. According to his Instagram page, Guggimon is a ‘Fashion Horror Artist’ and the verified Instagram account has over 1 million followers. A lot of players are excited to explore their gameplay using the new character.

WE RECOMMEND
Raid an Artifact in Fortnite: Here's how to complete this Fortnite Weekly Challenge
Fortnite season 7 countdown event has arrived just before the launch of the new season
Fortnite Season 7 Update 3.18 patch notes: Learn about the Fortnite Downtime and more here
Fortnite Season 7 Latest Leaks: New Animals, Skins and Aliens
How to craft pistols in Fortnite? Find out the Pistol Crafting method here