Garena Free Fire: How To Get Money Heist Rewards In The Game? Check Details

All the rewards in Garena Free Fire, especially after the Money Heist x Free Fire crossover can be achieved via completing the daily challenges in the game. 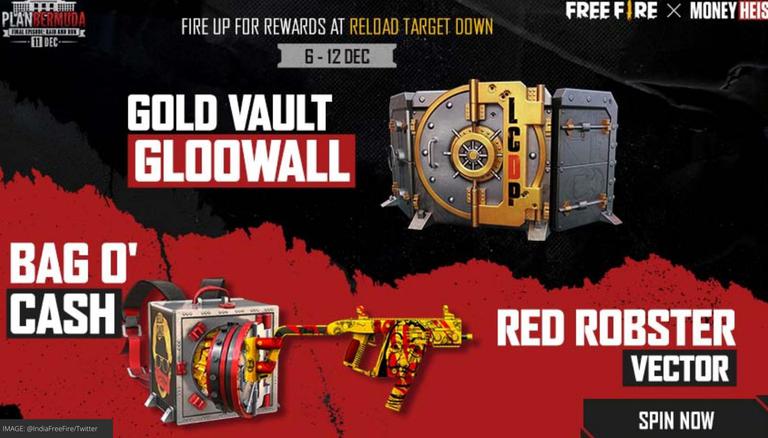 
Garena Free Fire is holding several in-game events for players with multiple rewards. On December 4, 2021, Garena Free Fire announced two new prizes for players. These are the Red Robster Woodpecker and the Endless Bullet Emote. Players will be able to redeem these prizes from today till December 10, 2021. The rewards are a part of Free Fire's collaboration with Money Heist, a Netflix series whose final episodes were released on December 3, 2021.

The Free Fire x Money Heist crossover event has begun in the game on December 3, 2021, corresponding with the launch date of the final season of Money Heist. Further, the crossover event will end on December 14, 2021. During the event, a popular character in the Netflix Series who goes by the name Professor returns to Bermuda. The character also has a mission of locating the gold and saving the squad caught during a heist with the help of other Free Fire players

Among the latest, free fire rewards are banknotes, Gold Vault Gloo Wall skin, the Red Robster Vector, the Money Heist sports car and the Bag O' cash. These rewards have been made available in the game as a part of the collaboration between Money Heist and Garena Free Fire. The awards will be available via the in-game store and faded spinning wheels. As the Free Fire x Money Heist even will carry on till December 13, 2021, the game is expected to reveal new rewards in the coming days.

Sight locked and ready to fire! More Money Heist items to be won in the Reload Target Down event including the Gold Vault Gloo Wall skin and the Red Robster Vector gun skin!🔥

Collect them all now before the event ends on the 12th December 2021.#FreeFire #IndiaKaBattleRoyale pic.twitter.com/szV4NgRP2w

How to get Money Heist rewards in Free Fire

All the rewards in Garena Free Fire can be achieved via completing the daily challenges in the game. There are specific tasks and missions in the game that will allow players to claim in-game currency. Thereafter, the in-game currency can be exchanged for several items in the game, including skins and the new Money Heist sports car. Those who have been playing the game for quite some time will not face any difficulty in completing the challenges and unlocking several rewards for them. Stay tuned for more updates.