Xiaomi maybe working on a 2019 Moto Razr-like clamshell foldable, according to a new patent filing by the company in question.

Xiaomi maybe working on a 2019 Moto Razr-like clamshell foldable, according to a new patent filing by the company in question. Xiaomi apparently filed for a patent with the World Intellectual Property Organization (WIPO) last year in August for a foldable device with a clamshell form factor and pop up cameras. The patent was approved on December 6.

Note that just because Xiaomi has filed for a design patent, it doesn’t mean the company may launch a flip foldable anytime soon, or at all, for that matter. OEMs are known to file such design patents all the time. At best we can say that Xiaomi maybe working on such a prototype product that may or may not see the light of day. Just as there may be more designs that it may be working on simultaneously. One of those designs was made commercial recently in the form of the Mi Mix Alpha – which has been launched in China in limited quantities. 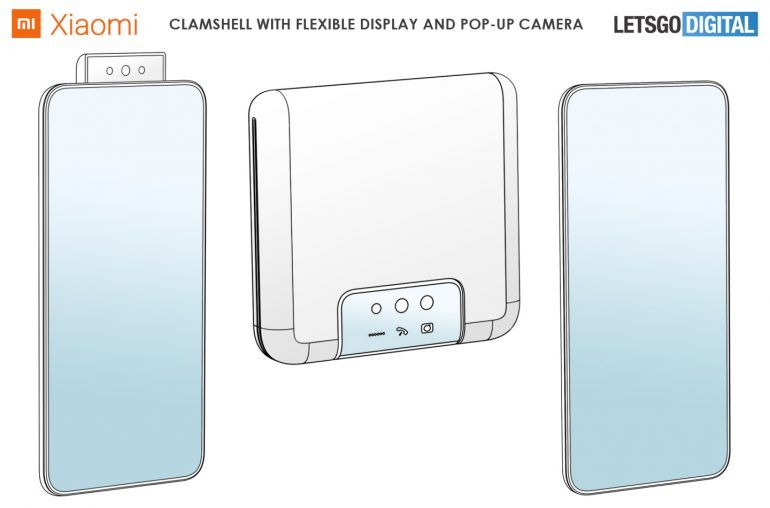 The Mi Mix Alpha is an all-screen and no-bezel smartphone like no other. It’s not a foldable like the Samsung Galaxy Fold or the Huawei Mate X, but it’s as futuristic – even more, some would say. It costs way more than the Fold and Mate X as well. The concept Mi Mix Alpha from Xiaomi has been launched in China at a staggeringly high price of CNY19,999 (roughly Rs 2 lakh).

The Mi Mix Alpha has a wrap-around display – that starts at one end, wraps around one side, and meets a vertically aligned strip at the back that holds the cameras. The Mi Mix Alpha has minimal bezels on the top and bottom and ditches the physical side controls altogether. For those in search of numbers, the “surround screen” on the Mi Mix Alpha, entails in a screen-to-body ratio of 180 per cent. It’s not even funny, this thing is literally all screen.

As opposed to something like a Mi Mix Alpha, a clamshell foldable seems a lot more feasabable. More and more companies have started exploring it. Motorola has already launched the 2019 Moto Razr with such a design. Samsung is also working on a similar setup that may launch early next year alongside the Galaxy S11 series.

PEOPLE HAVE PLEDGED SO FAR
What is Airtel Wifi Pack and how to use it in Airtel Wifi zones?
How to hide apps in Vivo mobile phones using in-built features?
How to convert Idea 3G SIM to 4G? Step-by-step guide on how to upgrade and activate 4G SIM
Realme fitness band confirmed to launch in February in India
Enjoy high-speed internet: Here's how to start with Airtel Wi-Fi pack
DO NOT MISS
CONGRESS: IS TRUMP LORD RAM?
CMO OFFERS ASSISTANCE
UMAR AKMAL ROASTED BY NETIZENS
NRITYA GOPAL DAS ELECTED PRESIDENT
MANJREKAR PICKS ASHWIN OVER JADEJA
BHUMI PEDNEKAR WELCOMES ARSHAD WARS