A team of engineers from UC Berkeley has developed a highly efficient cockroach-inspired robot that can't be squashed or killed. 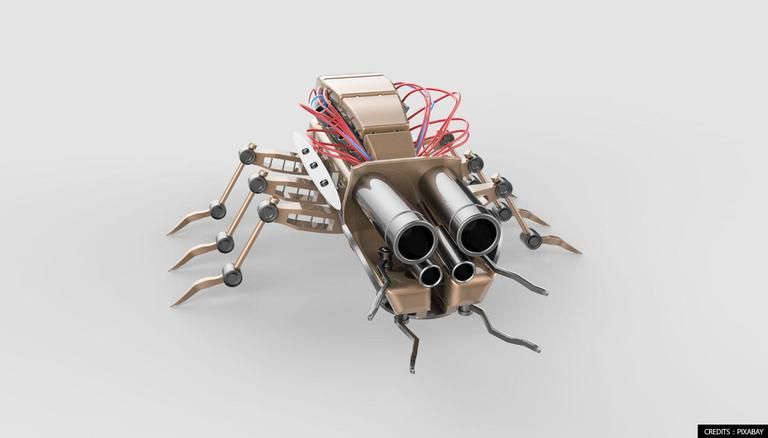 
Recently, a team of roboticists from UC Berkeley has developed a highly efficient insect-like robot. The tiny little invention of the engineers was inspired by the cockroach. The robot has the ability to squeeze through the tightest of spaces and has the capacity to withstand approximately one million times its own weight. Built on the principle of sticky footpads, called electrostatic adhesion, the tiny little device has an impressive speed, nearly overpowering its biological counterpart.

The speciality of the cockroach-inspired robot

Weighing around 20–65 milligrams, the scurry device can impressively bear loads of about 60 kilograms without breaking. Constructed from a thin, layered material that bends and contracts, the tiny little device can easily enter the most crucial of spaces. The cockroach-inspired modelled robot can eventually be used in emergencies to detect toxic gases and other substances.

The engineers have kept the design simple. It's made from a thin sheet of polyvinylidene difluoride (PVDF), a piezoelectric material that expands and contracts when an electric voltage is applied. As per the latest research reports, it has come to light that the robot is highly durable. The two electrostatic footpads of the robot have a sticky potential. The robot can firmly stick on any surface and move around or rotate using the other feet. The two footpads give operators full control over the trajectory of the robot, and allow it to make turns with a centripetal acceleration that exceeds that of most insects.

READ | Cockroach spotted inside White House, netizens say 'will vote for it'

As per a report published by the Science Daily, mechanical engineer Liwei Lin from the University of California, Berkeley said, "Most of the robots at this particular small scale are very fragile. If you step on them, you pretty much destroy the robot. We found that if we put weight on our robot, it still more or less functions. "

"Our original robot could move very, very fast, but we could not really control whether the robot went left or right, and a lot of the time it would move randomly, because if there was a slight difference in the manufacturing process -- if the robot was not symmetrical -- it would veer to one side," said Liwei at UC Berkeley.

READ | 'Cry Me a Cockroach': US zoo has an unusual fundraiser for scorned exes on Valentine's Day
READ | 'This is not a joke': Thai man takes injured cockroach to veterinarian for treatment
READ | Nivetha Pethuraj finds cockroach in her food, demands strict action against restaurant
First Published: 8th July, 2021 22:53 IST

WE RECOMMEND
Nivetha Pethuraj finds cockroach in her food, demands strict action against restaurant
From painting to writing, man with longest tongue can do jaw-dropping things with it
'This is not a joke': Thai man takes injured cockroach to veterinarian for treatment
'Cry Me a Cockroach': US zoo has an unusual fundraiser for scorned exes on Valentine's Day
Peter Weller birthday: Guess the right movie of the 'Batman' star based on just the plot