Microsoft Set To Retire Internet Explorer In 2022, Netizens Call It 'end Of An Era'

As Microsoft announced that it's finally shutting down its Internet Explorer browser after 26 years on the market, netizens flooded Twitter with hilarious memes 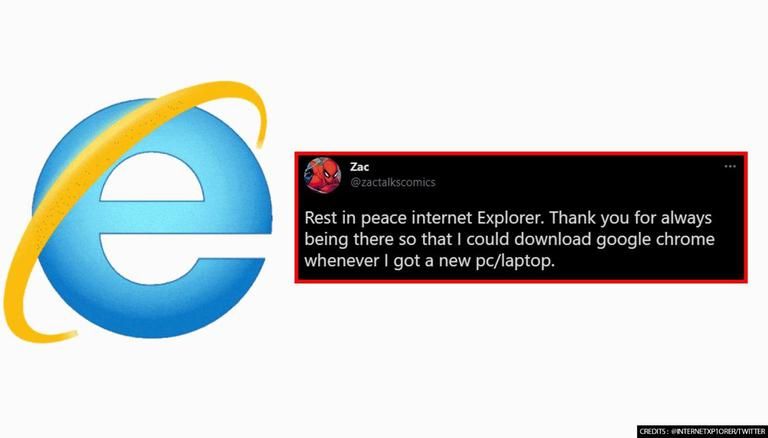 
As Microsoft announced that it is finally shutting down its Internet Explorer browser after 26 years on the market, netizens flooded Twitter with hilarious memes. According to a blog post, on May 19, Microsoft announced that the web browser, which was launched in 1995, will shut down on June 15, 2022. The company said that the latest version of the programme will be retired and no longer be supported by most versions of Windows 10.

Understandably, the news reminded people of their childhood, however, it also gave a chance to meme-makers to have some fun. While some users joked that Internet Explorer was the “best” at downloading Google Chrome, others called it an “end of an era”. One user even jokingly said, “immensely surprised to find out that dora the explorer is internet explorer's granddaughter”.

READ | Microsoft investigated Bill Gates before he left board: Report

Now that internet explorer is retiring, it literally feels end of an era! #Microsoft #InternetExplorer

That's like saying that the future of my wife is another woman with a different name.

RIP Internet Explorer, you were the best at downloading Chrome. 😞

Rest in peace internet Explorer. Thank you for always being there so that I could download google chrome whenever I got a new pc/laptop.

Me after downloading google chrome on internet explorer:
#InternetExplorer pic.twitter.com/COZdqYqiB0

#Microsoft finally retiring #InternetExplorer
A sigh of relief for #FrontEndDevelopers

If internet explorer is gone, from where will we download chrome and other such browsers?

Meanwhile, the company announced that the alternative for most businesses will be Microsoft Edge with IE mode. Microsoft said that it ended support for Internet Explorer 11 for the Microsoft Teams web app last year, and it is also planning to cut it off from accessing Microsoft 365 services later this year. Internet Explorer 11 will no longer be supported for Microsoft’s online services like Office 365, OneDrive, Outlook, and more on 17 August.

It is worth mentioning that Microsoft has been trying to stop people from using Internet Explorer for more than five years now. Microsoft Edge had first appeared in 2015, and it kicked off the end of the Internet Explorer brand. The company since labelled IE a “compatibility solution” rather than a browser and encouraged businesses to stop using the ageing browser in favour f Edge and its IE mode.